Session 2 is now done too, and again, the plan went well.

You may recall that yesterday I said we might wait until half an hour after the doors open as Dave of Fermentedly Challenged suggested. This didn't happen. We got there a bit before 5:30. We actually had time to get dinner from a food truck before getting into line.

I am always amazed how quickly everyone gets into the convention center once the line starts moving, and to be honest, I believe last night was even faster than usual. I'm not sure what they did differently, but there was a noticeable improvement to a a process that has always been wonderful. The members-only line is still the preferred way to go, but waiting with the general public is not at all bad. Not bad at all.

We had our tasting cups a little after 5:45.

We started out the night in the "A" section (mid-west breweries), concentrating on the breweries that had been suggested to us. The Beer Model was on the lookout for pumpkin beers. I was just on the lookout to talk to brewers.

We also got to other breweries in this time period, but eventually, it was time for the Sweet Meats and New Belgium Treats: New Belgium Brewing and The Pullman presentation in the Beer & Food Pavilion. This might be the highlight of the evening.

So, if you are a beer geek and know New Belgium at all, you recognize the name Lauren Salazar. She is New Belgium's "Sensory Specialist", and really the genius behind blending NB's wonderful Lips of Faith beers. She was paired with Don Little, a chef from Glenwood Springs, CO to pair New Belgium Beers with meat desserts. 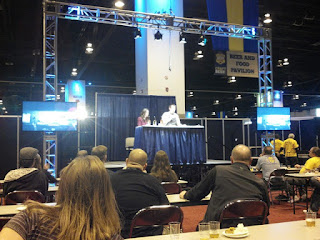 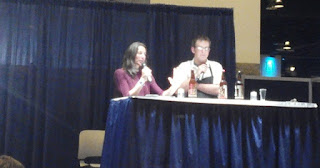 First we had Peach Porch Lounger, which is a nice funky wild bret beer with a nice peach flavor. It was paired with .... you are not going to believe it .... DUCK MEAT Donuts. Let that sink in a bit. Donuts cooked in duck meat grease. There was Mexican chocolate (a little spice in the sweetness) on top. And it was awesome. So Yummy.

Then, we got some Tart Lychee, which is an awesome beer. Lauren calls it the worlds first "pound-able sour beer", and it is the sort of sessionable beer that you are always wanting more of. With Tart Lychee we got little bacon and brazed pork belly sandwiches. The "bread" was French Macaroon cookies. There was some tart sauce on the top. This pairing was absolutely amazing. Wow.

The final paring was NB's Super IPA (which actually was the best IPA of the night I think). Lauren called this the "dankest, nastiest beer she has ever had". The dessert that Don paired with Super IPA was a pound cake that used Foie gras rather than butter. There was a hop caramel sauce on it. Again, just awesome.

After this presentation, we made our way to Wynkoop Brewing Company. And, of course, we had to try the Rocky Mountain Oyster Stout. It was funny the mix of people around this beer. About half were OMG .. I have to try this beer. The rest were clearly a bit disgusted and afraid of it.

This is a good beer. The Beer Model says it tastes a bit meaty sort of like a bacon beer. Mostly, I just got a nice stout flavor with perhaps a meaty undertone, but I am quite certain that if no one told me this was a beer with bull testicles in it I would never have guessed it was anything more than just a stout.

Good beer, but the buzz about it is all genius marketing. 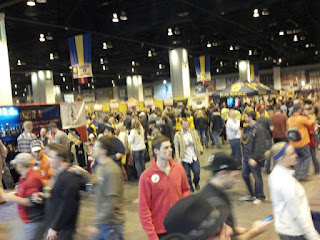 We started to wait in line for Crooked Stave, but it was almost time for another food beer pairing and we decided that we could always just go to their tasting room. 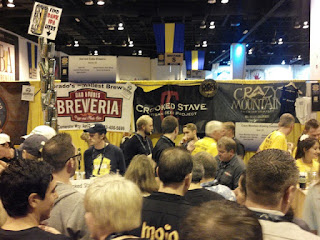 So we made it back to the Beer & Food Pavilion. Pretzel & Beer Pairings. The beers were good. We had Victory Prima Pils, Great Divide's Claymore Scotch Ale, and Flying Dog's Raging Bitch. I was pretty disappointed in the pretzels. They were just regular Snyders of Hanover pretzels. 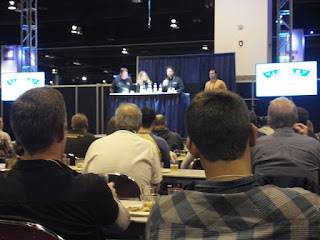 We got to Tröegs Brewing Company and tried Hopback Amber Ale, Perpetual IPA, and the Mad Elf. I made a note that Perpetual IPA was the best IPA of the night, but that is not true. I am not sure why I wrote that note so early in the evening. 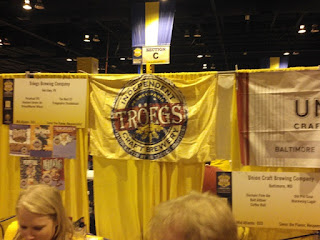 Most of the beers at Three Floyds Brewing Co. were already gone, but I tried Gorch Fock and Munster Fest. I am disappointed that I didn't get to try the others as Three Floyds was one of those breweries I was looking forward to. 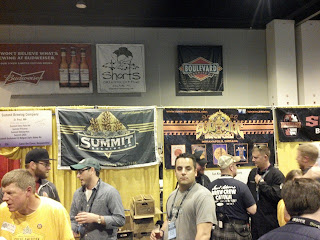 We made it to the Sam Adams Long Shot winners table. I liked the 3 beers, but the Magnificent Seven was much better than the other two. 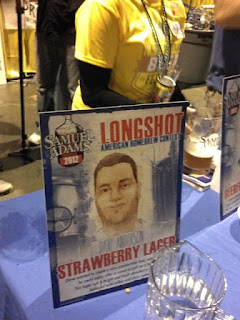 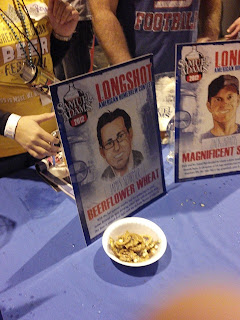 After that, we wandered around a bit. I ran into Eric Gorski, who is a Denver Post writer who does First Drafts, which is about Denver Beer. He seems to be a cool guy. I told him I was a fan. We talked beer a little bit. He told me to try Catawba Valley Brewing Company, and so we did.

I tried Farmer Ted's Farmhouse Cream Ale, which was, well you know, a cream ale. I tried Indian Head Red Ale, which was, well, you know, an Irish Red. I tried Abul-Abaz, which was a nice farmhouse ale. At this point, I was wondering why Gorski had suggested this place. It had good beers, but Eric had said he thought it was the best brewery he had tried.

Then, I tried there Berliner Weisse "Napoleon". This beer was AMAZING. It has strawberries and rhubarb notes with the wonderful lactic acid sour of a typical  Berliner Weisse. It was a wonderful awesome beer.

Tracy's new shirt got lots of attention. We probably should charge Anne-Fitten a marketing fee. People really liked the "brewgasm" ... or maybe they just liked looking at my wife's chest. Either way, apparently, www.brewgasm.com will be selling them relatively soon.