There are tons of other articles out there. It is becoming more and more popular to pair beer with food, and Thanksgiving is the biggest holiday meal of them all. Beer has an advantage over wine in that there is such a wide variety of flavors that make it fun to pick and choose to match up with the food.

I don't really drink wine, so my adult beverage of choice for any meal is beer, and over the past several years, especially, it has always been local craft beer with my Thanksgiving meals. Last year, I was at my sister's house in Wisconsin, so I had some midwest regional beers. This year, I am in Colorado, so I am drinking (mostly) Colorado Beers. 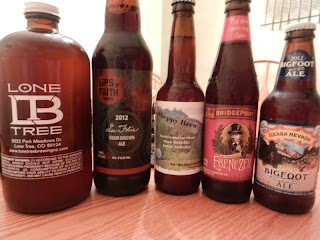 I have lots of home-brew in the house. These are the ultimate in Colorado local. Heck, they traveled from my back porch to my basement to my kitchen to my table. You cannot get more local than that. Both my wife and I will be having some of those over the course of the day. I do have some commercial beers that I will also enjoy.

Yesterday, I picked up a half-growler of Lone Tree Brewing Company's Hoptree IIPA. Lone Tree is probably what I would consider my most local brewery (other than SheppyBrew of course). Hoptree is a double IPA with 11 hop additions and an ABV of over 8%. I have had it before and think it is a great double IPA. This (I think) will be my dessert beer. I know usually the beer-pairing experts choose something more dark and coffee like, but I want hoppy for dessert. My wife may have a taste, but doesn't like double IPAs (can you image that) so will probably not be having much of this.

For quite some time, I have had a bottle of 2012 La Folie sitting in my commercial beer fridge (yes, I have a home-brew beer fridge and a commercial beer fridge. Jealous, aren't you?). I have been waiting for a special occasion to open it up, and today is the day. I love well-made sours and think it will pair well with the main meal. My wife also doesn't like sour beers, and will not be partaking in the La Folie.

SheppyBrew, especially Eric the Awful (which is what I have in the keggerator right now), will be consumed at various times before, during, and after the meal. The Beer Model will probably stick with beers like Boo Berry Wheat, Laser Salt, and Ello Poppet, which all happen to be good beers to pair with turkey dinners.

The picture above includes Bridgeport Brewing's Ebenezer Ale. It is not a local beer. I included it in the picture because it is appropriate for the holidays. I don't know if I will be drinking any today or tonight.

The picture also has Sierra Nevada's 2012 Bigfoot Barleywine, which is also not local, and I also am not sure I will have today. It is a good beer for holiday meals as well. Nice and big and flavorful and malty.

There you go, that is basically what I will be drinking today. I certainly have a lot of choices for my Thanksgiving beer - food pairing pleasure.

What are you drinking today?