I miss NHL hockey. It seems like we just had a work stoppage, and here we are again with another. I don't care which side is "right". Just work it out and get back to work.

I like sitting in front of the T.V. watching the Blackhawks and drinking homebrew. The SheppyBrew brewery has brewed a couple of beers named in honor of my favorite hockey team, and it seems a shame to waste them on the NBA.

One such beer that I have not brewed in a long time is Blackhawk Black Ale. Apparently, I won't be able to watch the Blackhawks anytime soon, but I can still brew up and drink this SheppyBrew classic. 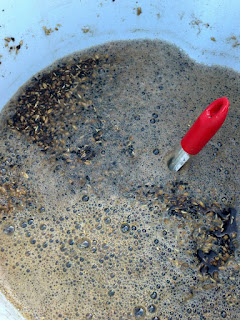 Last time I brewed  Blackhawk Black, it was still a 2.4 gallon, partial - mash recipe, so this time I had to convert it to 5.5 gallon, all-grain. This is super-simple with Beer Smith. I don't know what I would do without that software.

This past Sunday, I brewed it up again.

As usual, I got the mash started early in the morning, and let it go through church. As I sometimes do, I brought my bike to church so that I could get home while my wife and kids were in Sunday School. This allowed me to get re-started quicker than if I waited for my family.

The mash started out high (almost 160) and I used ice to cool it down to about 154 before I left. It was still at that temperature when I returned about 2 hours later. 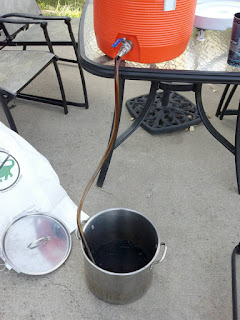 When I returned, I started heating up the the sparge water while draining the first wort. It was a beautiful black color and tasted fantastic. I got almost 8 gallons of wort at about 1.046, which was a bit lower than planned for. I decided to boil an extra 15 minutes. 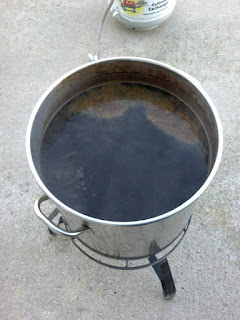 The boil itself went fine and I remembered to make all my additions at appropriate times. This time I did not use any hop sacks. The extra gunk in the bottom of the pot during transfer reminded me why I usually use hop sacks. I got about 5 gallons into the fermentor, but I poured in all of a 2 liter starter, bringing up the total to 5.5 gallons.

The recipe (see Blackhawk Black Ale) has raisins and seeds of paradise added to the boil, but I decided to added the paradise seeds into the fermentor and will add the raisins into a secondary vessel. I crushed the seeds and soaked them in vodka to make sure they were sanitized.

I pitched the half gallon of yeast starter at about 64 degrees. Fermentation took off quickly and I needed a blow-off tube early the next morning.

Blackhawk Black Ale came about as a tribute to New Belgium Brewery's  1554 Enlightened Black Ale. I would certainly not consider it a clone. In fact, I am purposely doing things I know will make it unlike 1554. Although, I called the recipe style "Belgium Specialty", sometimes I call it a porter. We will see how this batch turns out before I declare it one or the other.

Either way I am looking forward to drinking this in early 2013. Gosh, I hope the Mayans were wrong.