Here it is December already? Times flies when you are having fun.

Continuing my streak of monthly record breaking page-views, November's total page views beat October's for the new all-time record. Amazingly, the blog did it with the least number of posts of the year. I can probably thank momentum from GABF to help push me over the top.

Are you curious about which articles have been looked at the most? Sure you are. Here are this blog's top 10 viewed posts this month:

#3 ... Women and Beer Jul 23, 2011 ... People like Women. People like Beer. It is not really a shock that this post still gets traffic. It is still not in danger of losing the #2 all-time status anytime soon. 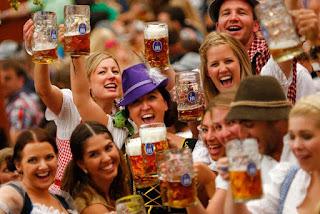 #7 ... Pre-event #GABF Post Sep 29, 2011 ... I honestly have no idea why this would get traffic. I think I've said this before, but this is the least interesting of all my GABF posts from any year. Shockingly, it is #8 all-time. This seriously makes no sense at all.

#8 ... Upcoming National Home-Brew Day Apr 17, 2011 ... Another one I am surprised by. The only thing I can think of is that people like looking at the picture of my hot wife brewing. 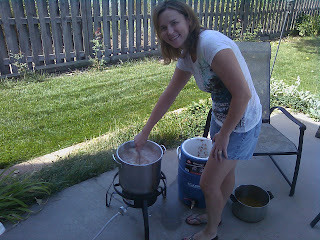 #9 ... Poison Rationality Oct 9, 2008 ... The first of my Poison Rationality posts where I just share things about the world which just don't make sense to me. "I chime in with a haven't you people have heard of closing the [expletive deleted] door. No it's much better to face these kind of things with a sense of Poison Rationality."

#10 ... Perfect Beer World Nov 2, 2012 ... I don't know if you've noticed, but this is the only post on the list that was actually written in November. It is just my contribution to Novemember's "The Session".

And, I am somewhat surprised that only one of the posts that I wrote and posted in November made it to the most-viewed list for the month (and that one just made it in at #10). I suppose that none of the 9 articles were that interesting. I did sort of expect that All-Grain Version of the White House Honey Ale would have similar success to its predecessor, but I was obviously wrong.

Another interesting oddity about this month is one of the most popular search keywords for the month was "dirndl cartoon". I have never (until just now) used the word "dirndl" on this blog. I have certainly never used "dirndl" and "cartoon" together. Most of these searches seemed to correspond to hitting Don't read this pre- #GABF post, although I was never able to find that page when I tried searching for "dirndl cartoon".

Of course, even though I did not use the word "dirndl", the article was sort of about dirndls. Instead of using the word ("dirndl"), I used "Oktoberfest style of dress". I did show some pictures of women in dirndls.

Whatever. It just seemed weird to me.

Anyhoo, I am not going to make a prediction about December page views. Obviously, my sense of what should be popular is way off.