As far as I can remember, I have always left doing my taxes until the last weekend before they are due. This is partially because I know I always owe money, and I don't want to write the government a check until I absolutely have to. More to the point, though, is that I am a procrastinator when it come to doing things I don't like to do. I have always been this way and for the most part it works out very well for me.

Well, Sunday, in addition to being the day I had to prepare to file my tax returns, was a brew day. I had to brew TommyHawk APA (which is actually an IPA). Also, there was a BlackHawk's game I had to watch. Of course, Sunday I need to take the family to church as well.

So, it was going to be a busy day.

I got started with the brew day even earlier than usual. I hit my desired mash temperature pretty quickly and mashed for about an hour and a half. While the mash was going on, I entered the family income into Turbo Tax. 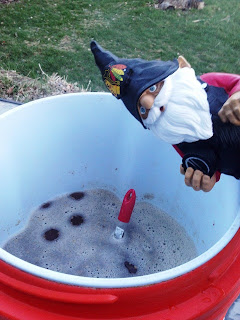 I got the wort in the kettle before time to go to church. I heated up the pot to almost boiling and let it sit covered while we were at church. The volume was a bit high, but the pre-boil gravity was perfect for that amount. I am sure that letting the pre-boil wort sit for a couple of hours affects the beer, but I don't think it will be that noticeable.

I have to say that the smell of first wort hops makes the prospect of having to pay taxes almost bearable. 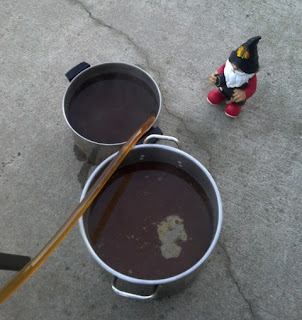 As I mentioned in 2013 Q1 SheppyBrew Stats, I just starting to play around with water additions. Today, I decided to target a "Hoppy Bitter" water profile from http://www.brewersfriend.com/water-chemistry. Beer Smith has a water profile for Denver that I used for my starting profile. Of course, I don't know how accurate that is, so I didn't go as far as Beer Smith told me. I simply added 6 grams of gypsum to the boil. It will be interesting to see if this makes the hops "pop". 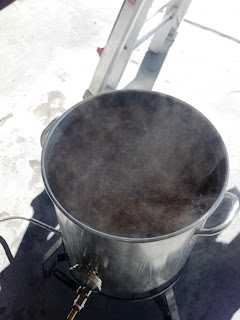 Anyway, while the rest of the family was at Sunday School, I rode my bike home to get the boil started. It was very windy, and the wind actually blew out my flame. At this point, I decided to move the pot into the garage for the boil. Just for the record, 8 gallons of water is very heavy.

I had to rig up some shade in the garage by draping a blanket over a ladder in front of the brew pot.

During the boil, I entered deductions and tax credits into Turbo Tax. That was done around 15 minutes into the BlackHawk / Blues game, so I was able to start up my DVR to watch hockey during a fair portion of the boil. Since TommyHawk uses First Wort Hopping and no more hop additions until very late in the boil, I did not really have to pay close attention to time. I did have to check on the boil from time to time to make sure the wind had not stopped it. 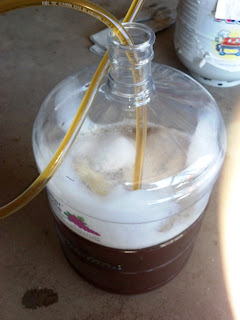 During cool down, I did State Taxes and watched more hockey.

Like I have done a lot lately, I put the wort into the fermentor before it was completely cooled to pitch temperature. I put the carboy into my mash tun along with cold water to get the wort to 60F.

Eventually, I got the taxes done and the brew equipment cleaned up. I watched the BlackHawks win. I also got dinner made for the family. And, like a good American, I wrote checks to pay my Federal and State government. Hope they don't waste it (yeah right).

Gosh it was a busy day.

I do think that having tax preparation day and brew day the same is a wonderful idea. I love to brew, and doing something I like makes the unpleasantness of doing taxes almost fun. Hope your tax preparation went as smoothly as mine did.

The yeast is currently eating sugars and pooping alcohol. The beer should be in the keg in about three weeks or so, and I should be able to drink TommyHawk during a significant part of the Stanley Cup playoffs.