It is a beer with a history and much character.

I got started Saturday (like usual) before the sun came up. I got the mash where I wanted it very quickly and let it go for a little over an hour and a half. It stayed right at 150 pretty much the whole time.

I did have to get Helles in a Hand Bock-sket out of the fermentor to make room for this batch. During Buckwheat's mash, I transferred Hand Bock-sket into a secondary fermentor. Hand Bock-sket is doing real well. Its gravity is at 1.014 making it a 7.5ABV beer at the moment. The sample yesterday tasted great .. .just what I think a Maibock should taste like. I am looking forward to having it on tap in early May.


After the mash was done, I collected the wort with no issues. I do think this batch is lighter in color than I remember any of the others being. It is certainly going to be lighter in color than the picture on Buckwheat's Belgium Pale Ale official web page. I did use Castle Caramunich, whereas in the past I have used Weyermann's Caramunich III. My guess is that my wife won't mind the lighter color, and it should taste the same.

My almost-8-year-old son made the family breakfast yesterday. Isn't that cool? I had French toast during my boil.


I collected almost exactly 8 gallons of wort. The pre-boil gravity was a little low, but nothing majorly off. I ended up compensating by boiling a little longer. The boil went smoothly. I added in everything right as planned. At the last minute, I decided to add the whole ounce of EKG hops instead of the .75 that the recipe called for. I did not use a hop sack this time. 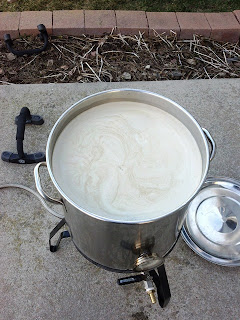 The cool-down went pretty quick this time, and the wort went into the carboy pretty clear. I did leave behind quite a lot of "gunk", but I still did end up with almost 5.5 gallons in the carboy. My OG was a bit low, but I am ok with that. I had been thinking this beer should be a little lower ABV than the past couple batches anyway. After the wort transfer, I set the carboy in my mash tun with ice water, getting the temperature just below 60F. I pitched two packs of S-33 and added White Labs' "Clarity-Ferm".

Then, I put the fementor in the basement to allow the yeast to do its thing. I was cleaned up before noon.

My son and I had lunch and then went for a bike ride.

Easter Sunday morning, the yeast was active. Fermentation is underway.

It has been quite awhile since there had been something in the keggerator for my wife. She is really looking forward for this to be there in a few weeks.
Posted by ESheppy at 4/01/2013 06:29:00 AM