Like always, I brined the chicken in home-brew for a couple of hours. I do think that at some point I need to remember to start the bird soaking sooner. But, like usual, I did not decided to make the bird until the day of. 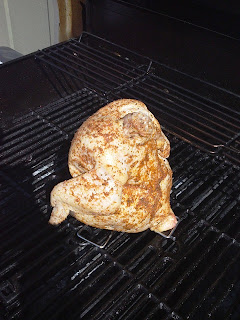 I used a rub that I had sitting around in the our spice cupboard. The grill was pre-heated and then I turned off the middle burner to allow indirect heat. A couple of times, the temperature dropped below 350, and I turned the middle burner on low heat for a few minutes.


I let the chicken cook somewhere between and hour and a half and 2 hours. I let the internal temperature of the bird get to 175 before I called this one done.

The chicken turned out awesome. It was crispy on the outside and relatively juicy on the inside. I still think that the beer-can chicken I did last year was juicier and better over-all, but this one is close enough that it is just a matter of variations due to other factors. Or it might just be the fact that I am romanticizing the idea of the beer can being up the chicken's butt.

Anyway, I had a nice dinner Sunday. Just thought I would share.