Will Drink in May


Kegging my Helles in a Hand Bock-sket #homebrew beautiful gold beer 7.5 ish abv. Will drink in May.


I like "Will drink in May" - I know what you mean but it sounds so decisive. Like an event, or a bumper sticker

Kinda like "will work for food," but not sad and needy.

Well, as you may remember (but quite likely don't), the SheppyBrew Brewery does have official brewery merchandise that we sell on Zazzle. Not very many people have ordered from the store (I can count them on one finger), but it is there in case the brewery ever gets fans who might want a hat or a mug or a stein or something else that says SheppyBrew on it.

For instance ... I could make "Will Drink in May" Bumper Stickers to sell in the store.

I did, in fact, upload an image to Zazzle for the "Will Drink in May" Bumper Stickers.

So, thanks to my facebook friend (I'll pretend her name is "Deb" so that I can refer to her without typing "my facebook friend" over and over for the rest of this post), May has become a bit of a promotional event for SheppyBrew Brewery. I doubt anyone will actually order anything for this "event" (with the possible exception of "Deb" just to be nice), but as the whole brewery thing is more of a figment of my imagination, it doesn't really matter. As I cannot sell my beer, marketing is not really all that important for the SheppyBrew Brewery, anyway.

Now, you may be wondering what is up with the Big Horn Sheep on the artwork. Heck, starting with the first blog post I wrote on this beer (see 5A. Maibock/Helles Bock), I've included pictures of Big Horn Sheep, but never explained why.

Well, let me start by telling you that Helles in a Hand Bock-sket is a style of beer called Maibock, which is a sub-category of German Bocks. Bocks are big in malt flavor and alcohol. They are nice and bready, with very little hop flavor. They are generally pretty full-bodied, although Maibocks are a bit less full-bodied than the other beers in this category.

Anyway, lots of commercial examples of Bock beers include a goat on the label.

Well, the Bock style of beer was first brewed in the 14th century of Einbeck, Germany as a lightly hopped ale. Later, Munich brewers in the 17th century adopted the style and started brewing it as a lager. Due to their Bavarian accent, citizens of Munich pronounced "Einbeck" as "ein Bock", which means Billy Goat. Over time, the beer just became known as Bock, and the billy goat on the bottles is sort of a visual pun.

The artwork actually comes from our biking ride up Waterton Canyon (see Biking with the Sheep).

And why am I drinking my Helles in a Hand Bock-sket in May?

That one is pretty obvious, but I'll say it anyway: Mai (as in Maibock) is German for the month of May. I currently have the batch of Helles in a Hand Bock-sket sitting in a keg. Hopefully, it won't be too painful to force myself to wait to taste the beer. 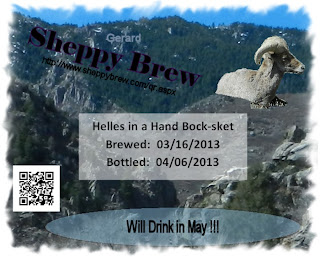