If you are a Chicago Blackhawk fan, or just happen to watch the Blackhawks from time to time, you know that when the Hawks score a goal, the United Center plays part Chelsea Dagger by The Fratellis.

When I am at home, watching the playoffs on T.V., I will play the song as well. Obviously, I play it when the Hawks score a goal on the road. I also sometimes play it during power-plays or if I just think the team needs a little boost. We hear Chelsea Dagger a bunch during the playoffs.

Generally speaking, I am not a superstitious person, but when I play this song, it helps the Chicago Blackhawks. And, not to brag or anything, but since I've started this little ritual, the Blackhawks have won 3 Stanley Cups. Before I started doing it, they had not won any since before I was even born.

Coincidence? I think not!

And what sort of beer was "Chelsea Dagger"? Well ... you may remember that the new BJCP guidelines came out this year (see 2015 Style Guidelines), and I really wanted to make one of the new styles, The first beer that came to my mind when thinking about what sort of beer I should brew was Pre-Prohibition Lager. I'm sure a fine upstanding lady like Chelsea would love to partake in a Pre-Prohibition Lager from time to time.

I quickly came up with a recipe and added it to the SheppyBrew website. 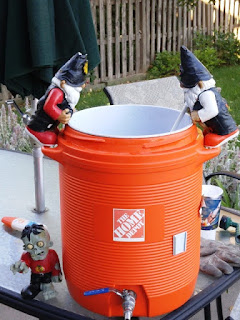 I brewed it not this past weekend, but the weekend before that.

Yes it took me more than a week and a half to get to this blog post.

Brew day went extremely well. I got started pretty late for me. As you can see in the picture above, the sun was up while we mashed in.

I let the mash go through church, and didn't get started lautering until after I got home. 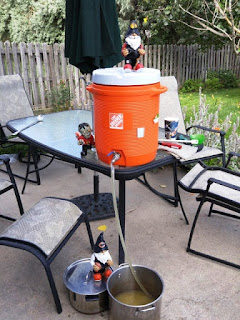 I first-wort-hopped with Cluster hops.

I got the boil going. The pre-boil gravity was a little high, so I diluted a couple times. 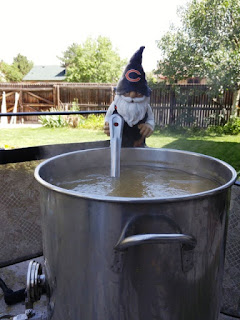 I added everything when it was supposed to be added. The boil got done without any issue.

I chilled the wort to around 70 with my wort chiller, and then racked into a fermentor in an ice bath to get the wort down into the 40's. 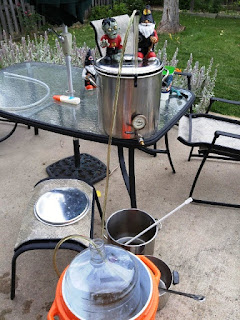 While that was going on, I went on a bike ride. The bike ride was cool. You'll be seeing a blog post about that if I ever get around to it.

The yeast did its thing.

I think there is beer in that fermentor now.

I will most likely keg this next week some time and let the beer chill for awhile before drinking. I know some people wait months before drinking lagers, but I find that I usually like them better a little fresher, especially if the lager is at all hoppy like this one.

It is my beer, so I'll drink it on my schedule. When you brew your beers, you can decide when you want to drink yours.

You can bet that I will let you know how I like this Pre-Prohibition Lager.