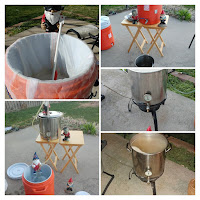 I brewed this past weekend.

Due to family time commitments, I did something a little weird. I split the "brew day" over Saturday and Sunday.

Well, we'll see how it turns out. I'm pretty sure it will be fine.

You may remember that I did something similar last time I made She Who Must Be Obeyed Wheat (see #SWMBO Wheat Brew Day). SWMBO turned out great, so I'm not concerned.

The beer I brewed is my 2017 Melting Stream Spring Saison.

For this batch, I decided to change up the recipe quite a bit. First, I made the OG (and therefore ABV) significantly less than previous years were. I also decided to try a new hop "Lemon Drop". 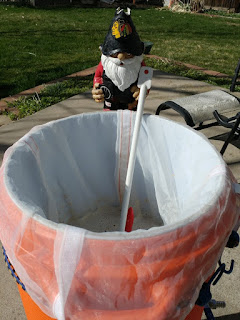 My kid had a Ultimate tournament Saturday and Sunday, so I knew I would not be able to get full brew days in on either of those days.

I started the mash after the first day of the tournament was done on Saturday.

It is odd for me brewing so late in the day. I had a couple beers while brewing, which is not SOP for me either. 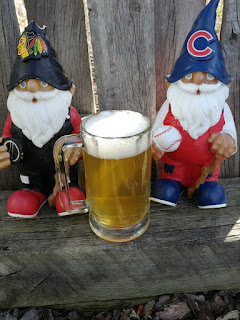 They were delicious beers, though, and I don't think I missed anything because of diminished brain function due to alcohol. 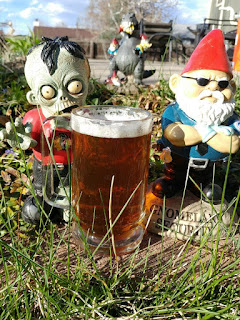 For saisons, my mash temperature is very low (145ish), and I let the mash go for a pretty long time (more than 2 hours Saturday). 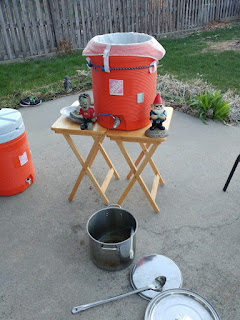 I got the wort collected, first-wort-hopped, and the boil started as the sun was going down on Denver. 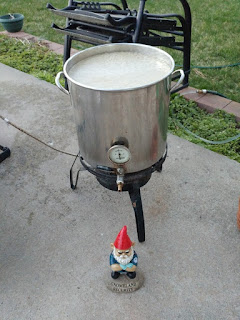 The weirdest thing I did with this spit-day "brew day", was that I actually started the boil. I got through the first half-hour of the boil and then covered the pot, turned off the burner, and let it sit until the morning. 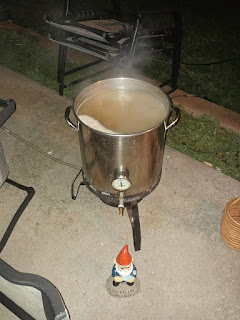 Early in the morning (although not as early as I sometimes begin), I restarted the boil for the last hour needed.

I did all my additions as the recipe calls for, including a pretty big amount of hops. 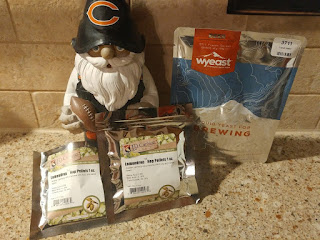 I got the fermentor filled in time to get my son to the tournament by 8AM. I did have to dilute the wort with water to get down to the 1.048 the recipe called for. No big deal. 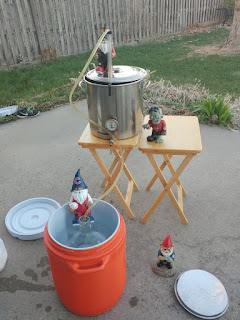 I left the fermentor in cold water most of the day to let the wort cool down to low 60's.

I pitched after we got home from the tournament.

The next day, the yeast had gotten started with nice white kraussen on the top. I put in a blow-off tube just in case.

And, now we'll see how it goes. I'm really looking forward to trying the new recipe with the Lemon Drop hops. I can't wait.