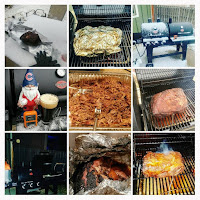 So, you may remember from First time Smoking Ribs that I recently got a new grill / smoker.

The ribs turned out really good. There are some improvements I think I can make, but I was pleased with the result. And my family liked them.

After the success of the ribs, I decided to try smoking a Pork Butt. You probably all know this, but a Pork Butt is actually the shoulder of a pig. I'm a little unclear as to why the shoulder is referred to a butt. I think it has something to do with Boston - area people not being all that bright.

But don't quote me on that.

So, I bought a 9 pound pork shoulder (8.92 pounds to be exact) from Sam's Club last week. I had Monday off work for MLK Day, and I used that day off to smoke some pork. 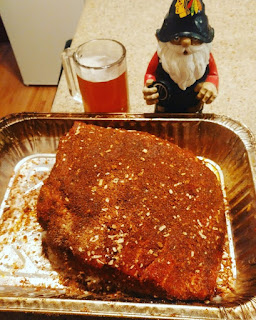 Based on research, I decided to smoke at a temperature between 220 and 250 degrees (Fahrenheit) and that I should give myself 13 hours to cook and probably another hour to let the meat rest before pulling.

This meant I needed to have the meat on the smoker before 4AM.

The night before, I put together a rub loosly based on the Basic Barbecue Rub on Some useful Recipes for Barbecue. 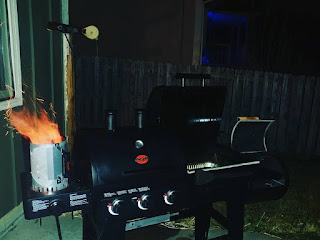 I woke up around 3AM to start preparing the grill.

I filled my charcoal chimney about 3/4 of the way full of charcoal and lit it on the little side burner of the grill (see picture above).

Once the charcoal was nicely lit, I placed it in the smoker box, and let the grill warm up.

I used a water pan under the grate that doubled to catch the drippings of the meat. 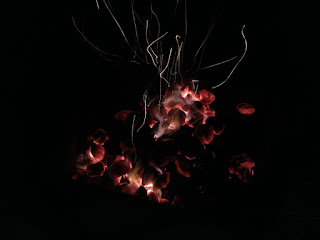 My temperature was up to 282, which was higher than I wanted to cook at, but I decided to go ahead and get started. I placed the pork shoulder on the smoker at 3:50.

And I played with the damper on the fire box to try to control the temperature.

About an hour into the cook, I sprayed the pork with Cherry Pomegranate Kombucha. I did this every hour on the hour (more or less) until the shoulder was wrapped. 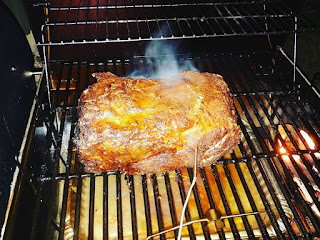 In the early morning hours, the cooking temperature was up as high as 300 and as low as 200, but I think I did a pretty good job of keeping the average between 220 and 250 for the most part.

I did a decent job at fire management. I think I still need practice. 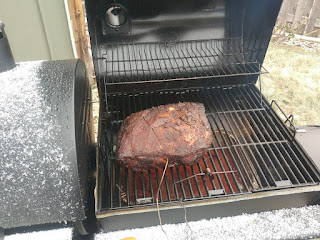 And it cooked. And I added wood. And I played with the damper. And I sprayed the meat every hour.

And I watched Netflix.

And it cooked. And I added wood. And I played with the damper. And I sprayed the meat every hour. And I watched the temperature of the meat.

At around 9 (a little over 5 hours in), I decided to stop with the wood knowing that it would probably not take much more smoke flavor into it. 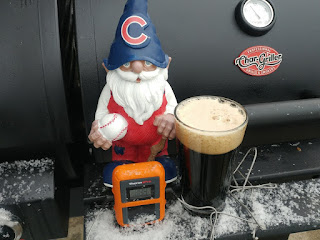 At 11:50, the internal temperature of the pork hit 160. I had decided (based on research) that I would wrap the butt in foil when the meat hit 160.

I put down onion and jalapenos on the foil, put the meat on top of that, and wrapped the butt.

Then, I put it back on the grill.

My internal temperature reading actually went down a few degrees after wrapping. It took awhile for the temperature to get up to 160 again. 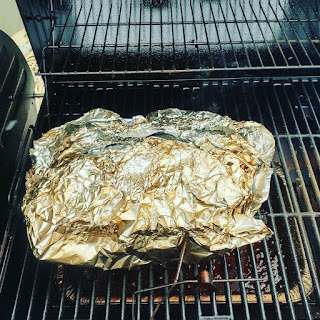 But eventually, it started rising again.

And it cooked. And I added charcoal. And I played with the damper. And I sprayed the meat every hour. And I watched the temperature of the meat. And ... it didn't rise as fast as it had been rising.

At 4:50, the internal temperature read 201. I had originally told myself that 205 is what I was shooting for, but I decided 201 was close enough to pull. 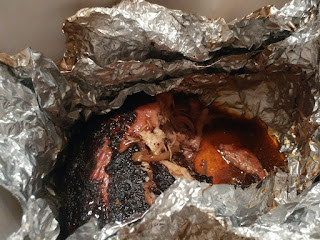 I put the wrapped pork shoulder in a cooler and let it rest for about an hour.

After an hour, I pulled about half of the shoulder into a pan and shredded it with 2 forks. I added in some of the juice and onions and jalapenos from the bottom. 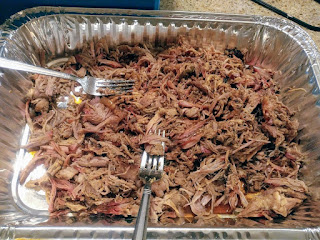 9 pounds of pork is a lot. We had shredded pork left, and we still had about half the butt that I had not pulled.

I decided to freeze the half that had not been shredded. It is sitting in our freezer.


This past week, I've had a few pulled pork sandwiches for lunch at work.

I was pleased with these left over pulled pork sandwiches.

So, I'm calling my first smoked pork butt a success.

A couple of lessens / observations:

I think next time I do something that takes this long, I might get the meat to the wrap and then put the wrapped meat into the oven to finish off where in a controlled environment that I don't have to watch for the last part of the day.

My clothes smell like smoke after I spend all day around a smoker.

Fire / temperature management is not really as easy as most youtube pit masters make it seem.

Anyway ... that is my story of smoking pulled pork. Feel free to comment below.