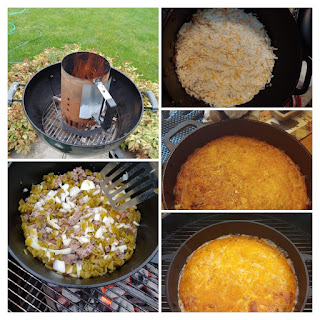 So .... at my work, we have this "Friday Breakfast Club". People on one of my teams take turns bringing in breakfast for the rest of the group every Friday.

It is a good deal. Everyone's turn comes up once every two and a half months. And, we get homemade breakfasts every Friday.

When it is my turn ... the house tends to smell pretty amazing in the morning and The SheppyBrew Beer Model gets a little jealous. I try to make it again for her over the next few days.

Last Friday was my turn to bring in food. And so Saturday I made some more for my wife.

Of course ... I never actually make the same thing twice ... so I had to change it up a little bit the second time around.

Here is (basically) the recipe I used to bring in to my co-workers. Note ... I doubled the recipe below so that I wouldn't have to worry about running out.

Preheat oven to 375
In a large skillet cook sausage until browned. Place the sausage on paper towels to drain. Leave the fat in the skillet. (You may need to pour some of it out if it's a lot)
Dice up the onions.
Add onions and green chilies to skillet and sauté until just tender. Place the sautéed veggies on a plate and set aside.
In a large bowl add the thawed, hash browns.
Stir in the sour cream until it coats the hash browns
Stir in the cheese.
Season with salt, pepper and garlic powder.
Spray a 9 inch deep dish pie plate with cooking oil and press the hash brown mixture into the pie plate getting it as flat and even as possible.
Cover the top with sausage, onions and peppers. Set aside.
In a small bowl beat eggs with milk.
Pour the egg mixture evenly over the top of the casserole. Top with shredded cheese.
Cover with foil and bake for 45 minutes.
Remove the foil and bake for another 10-15 minutes or until the casserole is fully set. 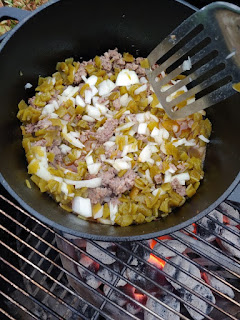 
On Saturday ... I decided to make this dish on the Weber Kettle in a cast iron dutch oven my kids got me for Father's Day.

I didn't double the recipe this time.

I cooked up the sausage over direct coals and added the chilies and onions to that for a few minutes. 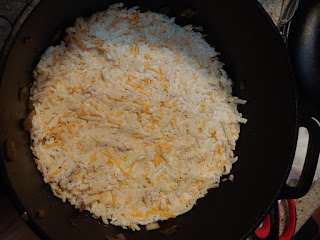 Then, I set up the charcoal for indirect cooking and layered the ingredients inside the dutch oven as the recipe instructs.

I let that cook covered for 40 minutes or so. 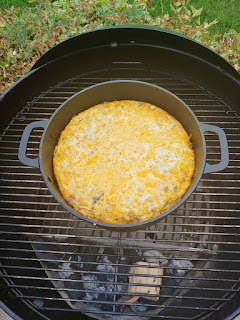 After 40 minutes, I added a chunk of hickory wood to the charcoal and let that catch. 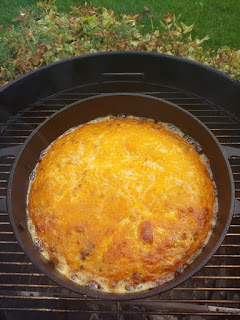 Then, I let the thing cook another 20 or so minutes uncovered. 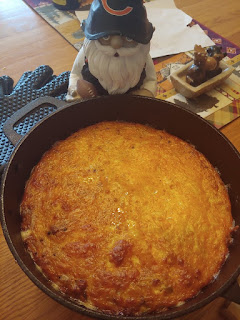 It rested for a bit, and the Beer Model and I had some for breakfast. It was yummy.

The hickory smoke was subtle, but a great little addition to the flavor.

The one thing that I realized I should have done was to strain out the liquid from the hatch chilies before adding them, because the bottom of the bake was a little bit "liquidy". I remembered to do that on Friday. Forgot on Saturday. The liquid isn't a big deal. It still tasted amazing.

I also think I could cook a bit longer on the smoke ... but again not a big deal.

So, it was great. I have not been able to use this Dutch Oven much so far. I really want to start using it more. If you keep an eye on Sheppy's Blog: Dutch Oven, you'll see what I do with it.

As always, you can always keep an eye on the regular SheppyBrew Channels to see what is happening with beer and other things: SheppyBrew's Facebook Page; Sheppy's Twitter Feed;SheppyBrew's Instagram Page; and SheppyBrew's Website. Of course, don't forget to visit this blog often as well!
Posted by ESheppy at 8/13/2019 07:33:00 AM