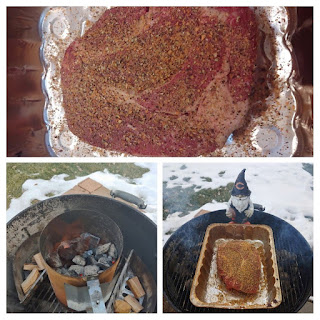 Sometimes it turns out great. Sometimes not so much.

Sometimes it come out a bit dry. Not terribly so. Just not as spectacular as it does when it turns out great.

A few weeks ago, I needed to make something for dinner that I didn't have to monitor.

At some point I came across a Slow Cooker Shredded Beef Recipe, and tried it out. Well ... of course I don't follow recipes very well, so it wasn't exactly that recipe, but the basics were the same.

It turned out Yummy. My wife actually complained a little that her shredded beef never turns out so well.

The only thing missing was that smokey / grilled flavor that I love so much. 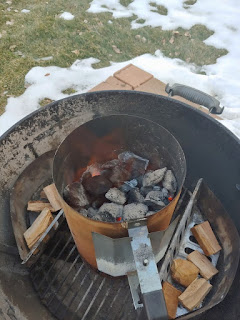 I think the reason that sometimes my smoked chuck roast turns out a little dry is that I don't retain all the juices to mix back in once I'm shredding. 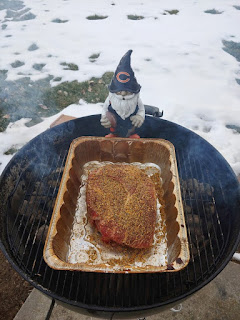 The hypothesis was that I could get the best of both methods ... i.e. nice smokey flavor with a nice juicy shredded beef.

My method was to smoke a chuck roast for a couple to three hours in a pan to retain the juices.

Then, finish it off braising in the crock pot just like in the Slow Cooker Shredded Beef Recipe. 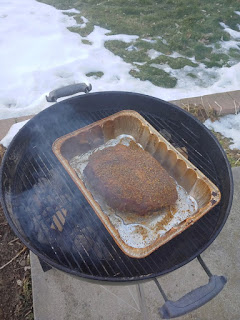 So, I did just that.

In the morning, I used charcoal and hickory wood chunks to smoke a chuck roast for about 3 hours. 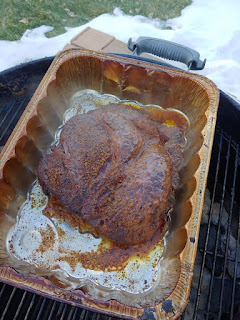 I added a little over a cup of beef broth to the crock pot along with a cut up onion. Obviously, I added yummy spices.

Then, I put the smoked beef into the beef broth, and let the pot cook on low for 4 to 6-ish hours.

By the time it was done, the kitchen smelled heavenly. 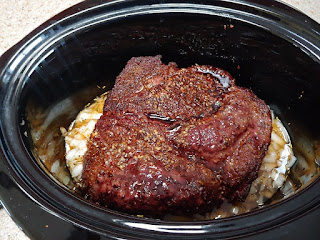 Eventually, I removed the tender chuck roast and scooped out most of the liquid from the crock pot. 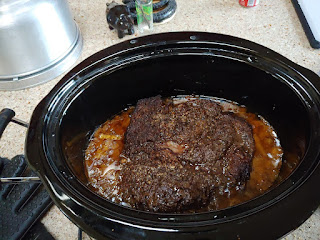 I shredded the beef and added back about half of the liquid I had removed. Maybe a little less than half.

I left that in the crock pot on "warm" until it was time to eat. I think that was like an hour, but I don't really remember. 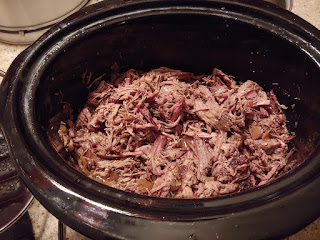 With the rest of the beefy liquid, I made a barbecue sauce. I didn't really follow much of a recipe for that. But, if you need guidelines, it is sort of kind of like the BBQ Sauce recipe on Smoked BBQ Drumsticks. 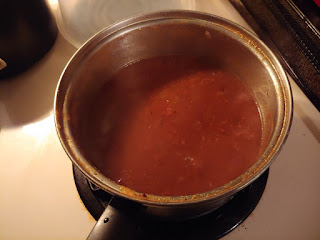 I feel like my hypothesis was validated. I really liked this meal. It turned out as good as the best time I smoked a chuck roast. It turned out better than the couple of times I've tried the Slow Cooker Shredded Beef Recipe.

For what it is worth, I repeated the experiment last week for a potluck type thing at work.  Actually, I did two of them for the work thing.

This time, I smoked the chuck the night before.

Right before I went to bed, I added it to the crock pot.

Right before I left for work, I removed the liquid, shredded the beef, and added back in some of the "beef juice".

I let the shredded beef sit on "warm" in the crock pot until lunch time.

Again, I served with buns.

And again, it turned out great. I had a few people mention ask me why they never get their roasts to turn out so delicious and juicy. I told them that it was because I'm awesome and they are not.

(and oh so humble)

As you can probably tell, this process works really well if you want to smoke chuck roast, but can't spend all day monitoring it.

Quite often, I'll have a couple of hours free on a weekend morning, but am too busy to keep an eye on things closer to dinner time. This works perfectly for those days, because I'm able to completely forget about the meal once it is in the crock pot.

Obviously, it is something I can use for work food events (which I seem to be having more of lately) because I can sleep while most of the cooking is going on.

I expect I'll experiment with with some more. I'm not sure how much smoke is perfect. Obviously, it depends on your taste and type of wood etc. I feel like I should do further experimentation to tune this process further.