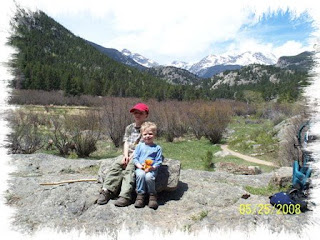 We went camping this weekend up in Rocky Mountain National Park. The weather was less than ideal, but I am still glad we went camping. I just wish the weather would have cooperated a bit more.

Because of the weather I got to use our little tent heater. This is the first time we have used it out of need. I tried it out once simply to test it. Friday night (actually Saturday morning) it was cold enough that I fired it up out of concern for the kids' comfort. They told me the next day that they were warm enough all night in their sleeping bags, so I guess it was not absolutely necessary.

We also drove into town for breakfast Saturday and coming back did as many indoor things as we could. We spent a long time in the visitors center and the "Moraine Park Museum". Afternoon was actually decent. I went for a hike while Connor took his nap and Tracy and Tyler did stuff around the campsite.

Luckily Sunday was nice enough that the whole family could hike together. Connor was on my back most of the way, but Tyler hiked almost 5 miles round trip. We went to Cub Lake which is a very popular hike starting close to our campsite. It took us about 6 hours with a really long lunch and a big rest at the lake. It definitely took a large portion of the day. Connor got his nap in the kid-carrier which does not seem at all comfortable, but he did not seem to mind.

My legs are pretty sore from the two hikes. Most of the soreness comes from carrying a somewhat large 3 year old on my back up and down mountainous terrain for several miles. I still think he weighs a bit less than my backpacking pack, but not a whole lot less. I skipped my workout night last night to watch the cup finals game last night, but if I were not so sore I probably would have at least gone for a little workout.

I also got to try out the new camping stove that I got for Christmas. Sunday morning was just boiling water for oat meal and coffee. My little old camping stove was fine for boiling water. But Sunday I made sausage and pancakes. My old stove just sucked at anything like that. The new one ROCKS. It has a nice big griddle that fits over all three burners and is the perfect size for cooking multiple things. Perfect for pancakes and sausage. I was really really happy with the new stove and how nice the pancakes turned out. It makes me wonder why I tolerated the old one so long. Well... The reason is actually obvious; I am cheap. I never would have spent money on this myself so it is one of those awesome gifts. Thanks Tracy (Tracy never reads this so she will not be getting a big head).

Apparently there was "bear activity" in our campground the first night we were there (the really cold and windy night). One of the rangers came by in the morning to remind us not to keep food or any other nice smelling things in the tent. Of course, when we checked in we got the same talk as we were in "bear country". I am not sure I see the difference between there having been a bear in the camp and there potentially being a bear in the camp. Either way, it is a bad idea to keep food in the tent. What is sad is that the Ranger probably convinced some people to be more careful just by telling people there actually was a bear. I would venture to guess that usually when a bear goes through a campground, no one notices. So, being more careful just because someone noticed seems ridiculous to me.

Anyway, once again I was disappointed to miss seeing the bear.

We did see a bunch of Wapiti (Elk). A large number of them had on collars with antennas .... Presumably transmitters. It takes away from the thrill when the wild animal has a man-made collar on.

I also saw a rather large coyote slinking through the campground in the dark. Well, I am assuming it was a coyote because it was way too big to be a fox and the only other choice would be a small wolf. It also could have been a ghost - canine for all I know. I have been seeing a lot of coyotes recently. They wander around our neighborhood in the mornings and evenings.