We seem to be on track for a world record in Silent Auction futility.

The silent auction has been going for 2 hours and they have raised a total of $225.

Of course, after one hour they were at about $25, so I guess it is picking up. Everyone is in the dining room now, so I do not anticipate this group even raising our minimum. People are just not that interested in the silent auction tonight.

It is a high-school class reunion group that has decided to raise money for "Fast Forward for Literacy".

We knew it would not be a big night because there are only about 110 people and only about 50 items. But, I never imagined it would be this pathetic.

I am not even really paying attention to it. I am watching the Broncos pre-season game on Sling Box.

The Broncos don't look that great either.

This damn thing goes until 11pm.

I was only supposed to work the during-event, but we were low on resources, so I had to be in charge of setup. At least it was a pretty easy setup.

14 bids in the system now. The Broncos are down 7 to 13. Almost half time. Offensive holding on the Broncos. 10 yard penalty. 16 seconds left until the first half is over.

We are up to $300. The customer owes us $1500 for our services. I hope they at least make the $1500. The only reason our fee is so low is because they signed the contract a year and a half ago when our fees were about half what they are now.

One interesting thing about this event is that they are also having a casino night. People seem to be more interested in the gambling than they are in the silent auction.

My wife is now trying to watch T.V. I am screwing with her by pressing pause. I wonder if she realizes what is going on. I'm not very nice when I am bored.

We are up over $1000 now. We have an hour and 18 minutes left.
I was just told to lower the minimum bid on a big-ticket item, so I think the total is going to jump up by $1,600 pretty soon. We might actually get above our fee. Sweet. Although I was sort of excited about breaking a record. Of course even with the $1,600 we are probably going to break the futility record.

Apparently, our employee, Mark is wheeling and dealing to get people to buy things at a reduced price. But, it has been several minutes since we lowered the trip to Cancun to $1,600, so I am a little confused. Maybe they got "cold feet".

Well, no sense boring my Blog readers any more on this subject.

Right now, we are at $1,026 with 1:10 left in the auction. I am assuming that soon some of these huge price cuts on the big-ticket items will bear fruit and we will jump above our fee for the total. Maybe.

I need a nap. It is going to be a real late night. 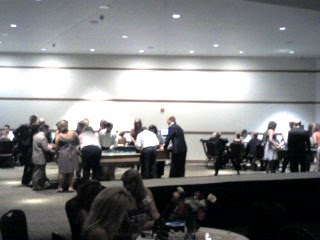 Email ThisBlogThis!Share to TwitterShare to FacebookShare to Pinterest
Labels: Auction