Well, I mixed up Monkish Wit in Rutt yesterday.  Tuke still has another week to finish up Buckwheat's Belgium Pale Ale, so for all practical purposes, the first quarter of 2010 is done.  You may remember in SheppyBrew 2009 Stats I discussed the beers that I had made in 2009.  I was curious to see how I've been tracking in 2010, so I took a look through my brewing calendar for what I have done so far this year.

So:
Interesting stuff, huh?  Well, I might be the only interested party.
Lately, I've been doing big hoppy darkish beers.  The beer model does not prefer big, hoppy, or dark.  We are running dangerously low on Wetta Blonde and Girly Berry, which are the Beer Model's favorites.  It has been requested that I work on getting the light beer inventory up.  I have started doing that.  Buckwheat's Belgium Pale Ale, and Monkish Wit are answers to that request.  I am pretty sure that one of my next batches will be a Girly Berry, and I certainly want to do a Whisky Wife Wheat so that it will be ready for early summer.  I have to take care of my #1 customer, you know. 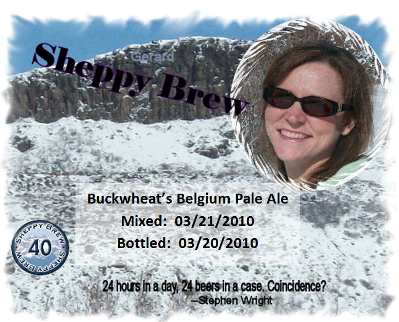