Tonight I had a 22oz bottle of Belgo India Pale Ale. 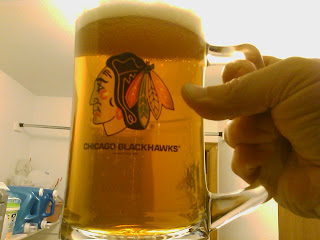 This beer is one of New Belgium Brewery's "Lips of Faith Series". It is full of piney citrusy American hops in both flavor and aroma. It has a pretty typical IPA medium-bodied mouthfeel and a pretty decent malt backbone. For its grains it is mostly pale malt (I'm guessing American 2-row) with some honey malt and just a touch of Caramel 120.

Unlike most American IPAs, though, it is fermented with a Belgium yeast, which gives it a bit of that musty / funky Belgium character. But, the hops in this beer really push that yeasty character to the background. If I did not know about the yeast, I don't think I would have noticed that it was a Belgium yeast.

It is a nice interesting beer.

The Beer Model doesn't much care for it. Too hoppy for her. 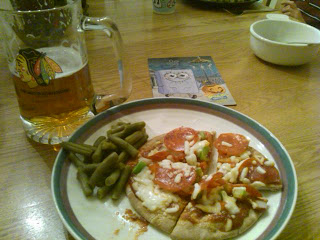 Tonight, the food pairing was Tracy's world famous "Pita Pizzas".  Yum.  I'm lucky to be able to come home to such wonderful food.

Paired with her pita pizzas, the Beer Model had a Girly Berry (we're almost out ... I probably need to make more sometime soonish) and some the all-grain version of Buckwheat's BPA.

I also had a bottle of Quarter Life Crisis Hoppy Red Ale, which in case you have not been paying attention to my blog or my SheppyBrew website, is the best beer ever brewed.


This weekend is the AHA Learn To Homebrew Day.  I am not teaching anyone to brew.  I probably won't brew anything this weekend, because my fermenters are full with Fox Sox Knox Rye Pale Ale and Bluefield Chocolate Ale.  I might bottle up the Fox Sox Knox Rye Pale Ale, but probably won't actually brew anything.
Posted by ESheppy at 11/05/2010 07:30:00 PM