I was listening to the Sunday Session with Pizza Port's Jeff Bagby last Wednesday night while working out.

Jeff used to work for Stone and has brewed Arrogant Bastard. In fact, he was part of brewing the very first batch.

At the end of the interview, Tasty snuck in the question about what specialty malt was used in Arrogant Bastard. Jeff gave a hint that it was one high crystal malt ... not special B. He even said that 150 is about right. He also mentioned that the recipe is incredibly simple with one specialty malt and one hop.

So, clearly Tasty was right to move away from Jamil's recipe. Maybe I should apologize to Tasty for my doubt of his judgement (see Arrogant Bastard III)

So assuming the CYBI guys got the hop profile right (which I think they do agree they have done), the recipe would be something like this:


Again, since I love the description on the back of the bottle:

"This is an aggressive ale. You probably won’t like it. It is quite doubtful that you have the taste or sophistication to be able to appreciate an ale of this quality and depth. We would suggest that you stick to safer and more familiar territory–maybe something with a multi-million dollar ad campaign aimed at convincing you it’s made in a little brewery, or one that implies that their tasteless fizzy yellow beverage will give you more sex appeal. Perhaps you think multi-million dollar ad campaigns make things taste better. Perhaps you’re mouthing your words as you read this. "


By the way ... I was wearing my "I'm an Arrogant Bastard" shirt a couple weeks ago. While I was having lunch with the family, an older lady came over to our table and politely asked:


"Excuse me, but where did you get your shirt?" (or something like that)

It was just an amusing encounter. Maybe you had to be there, but it was funny that this little old lady wanted to know where I got my "I'm an Arrogant Bastard" shirt. Tracy laughed, so it isn't just me. The lady also thought it would be fun to get one for her son-in-law. Apparently, she really liked the shirt.

I told her I got it at the brewery. I also told her that they probably have an online store and that I bet she can google "Stone Brewery" and see what she comes up with.

Since then I have confirmed that Stone does have an online store.

If you are interested in owning an Arrogant Bastard long sleeve t-shirt, you can follow this link: 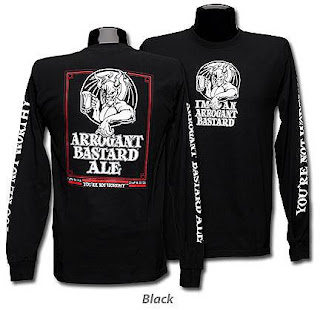 I may even go online myself and buy myself a hat: http://stonecompanystore.com/store/product/3093/ABA-Hat-Strikes-Back/