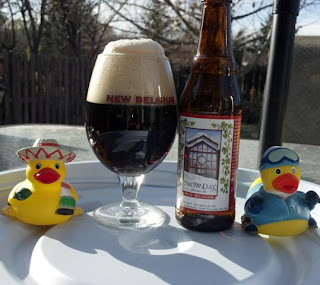 Ever since the Beer Model and I took our tour of New Belgium Brewery back in June, I have been looking forward to the release of New Belgium's new winter seasonal Snow Day Winter Ale. You see, Bernie (our tour guide) told us that it was replacing 2 Below and that it was going to be a black IPA. If you pay attention to this blog, you might know that I am a big fan of the Black IPA style of beer (or Cascadian Dark or American Style Black or Indian Dark Ale or whatever-else-you-want-to-call-it). See "Black IPA / IDA", "Cascadian Dark Ale", "Stone Soup IDA", "Psycho Dark and Bitter" if you want to see some of what I said about the style.
As soon as I saw Snow Day in the liquor stores a couple weeks ago, I grabbed a 12-pack. More recently, when Dave at Fermentedly Challenged did his review of Snow Day, it reminded me that I should probably add something on my blog about the beer.

New Belgium says this is a 6.2% ABV beer with 55IBU. It says it uses pale malt, crystal 80 and midnight wheat as its grain bill and Styrian Golding, Centennial, Cascade as its hops.

As you can see from the picture, this beer poured with a substantial light tan creamy head that never really went away.  It is pretty dark with a few ruby highlights (which the picture does not do justice to). It was well carbonated and just an all-around beautiful looking beer.

It has a nice spicy hop aroma. I got a touch of citrus as well, but think the goldings hops are more prominent in the nose. The overall hop aroma is not as strong as lots of black-IPA's, but it is definitely more than you would get from a traditional winter warmer type beer. There is none of the "typical" New Belgium yeast smell, but the dark / caramel notes are there behind the hops.

The hop flavor also seems mostly to come from the spicy styrian goldings, although I got a touch more citrus (maybe?) than I did in the aroma. The dark and caramel malts really complimented that spicy / floral hop presence. I love the choice of midnight wheat in the malt flavor. It really gives more of a smooth roasty flavor than most dark roasted malts.

Apparently, there are lots of fans of New Belgium's 2 Below who are disappointed to see it gone. But, have no fear. 2 Below is not gone for good. According to Bernie, the brewery is doing two-year cycles on their seasonals and 2 Below will be back in a couple of years. Personally, I like Snow Day much better than 2 Below, and I am happy with the change.