Going through my Google Reader this morning reminded me that tomorrow is Session Beer Day. Coincidentally, it is also National Beer Day.

If you check-in a beer under 4.5% ABV on untappd tomorrow, you will earn yourself not only a beautiful Session Beer Day 2012 badge, but also a National Beer Day badge. Two for the price of one. 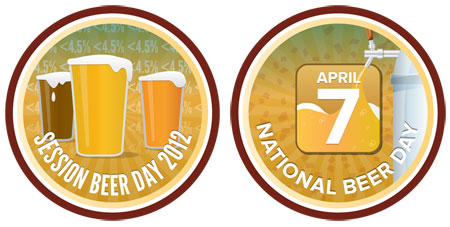 When I read this, I thought about it and told my BrewMaster, "Shep, I don't think we own any beers under 4.5%"

The BrewMaster answered me, "that can't be right, you idiot. We must have something under 4.5% ABV." (The SheppyBrew BrewMaster can get cranky early in the morning, so I tried not to take offense that he called me an idiot).

Rocktoberfest Lager is around 6%.

Even the few bottles we have of Buckwheat's Belgium Pale Ale are at 5.9% ABV. Might want to adjust that down a bit. I think my plan was to keep that a "sessionable" beer.

I won't go through them all, but you get the idea. I don't have very many low alcohol beers.

The BrewMaster was right. We do have a couple of beers under 4.5% ABV. The two beers I have "in stock" that fall in the untappd session beer definition are Free the Glutens! APA, and Red Failure. Free the Glutens! APA is only low in alcohol (4.3% ABV) because my gluten-free ingredients don't ferment as well as real beer ingredients. Red Failure is only low in alcohol (3.9% ABV) because I screwed up the brewing of the beer and watered it down.


You might be surprised to know that I am actually a fan of the session beer. There is no official definition of a session beer, but generally speaking it is one that is lower in alcohol so that someone can drink more than one in a session. Personally, I tend to think anything at or below 5.5% is a session beer. Untappd picked 4.5%, which is a number I've heard before. I know some people only consider beers below 4% as sessionable beers.

Regardless, one of the things that bugs me about the craft beer industry is that so many breweries try to make bigger and bigger alcohol beers and tend to neglect ones are nice and easy to drink without necessarily getting drunk. Just a couple weeks ago I mentioned that the Dogfish Head 120 Minute IPA has too much alcohol in it, and quite often the beers I don't care for on the list are the ones in which I can taste the alcohol.

I keep hearing and reading craft beer experts telling me that the next "big thing" in the craft beer industry is going to be an increase of session beers. I keep hoping that it is true, but they have been saying it for a couple years, and so far I really have not seen evidence of that being the case.

Anyway, I do plan on making some nice session beers as we get into the summer months. Again, for me, that means beers in the 5 to 5.5% range, but I think I'll try a few even lower.