To be honest, I am not generally a fan of the Belgium IPA Style. I think the funky Belgium yeast profile and the hoppiness of an IPA clash into something that is not really that pleasant. Sometimes my tasting "mood" is such that these flavors come across nicely on my tongue, but usually, I just don't really like them. 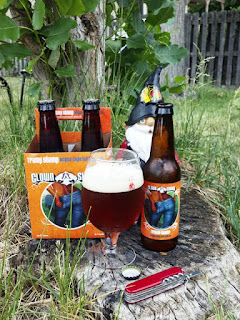 Tramp Stamp was no exception. It was fine, and I did like the second bottle I tried better than the first, but for the most part, this is not a beer I would seek out again. I am sure lots of people like this style of beer, I am just not really one of them.

Since More Beer Labels, here are some more suggestive beer labels I have come across on the internet. I have not tried any of these beers: