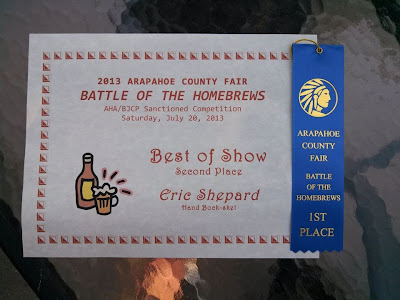 That is right ... SheppyBrew now officially has two award - winning beers! Helles in a Hand Bock-sket placed first in its category and second in the Best of Show (aka 1st loser) judging in the "Battle of the Homebrews" at the Arapahoe Country Fair. In case you don't remember, Sasquatch Hunter German Altbier won a blue ribbon in the Denver Region of the National Homebrew Competition earlier in the year (see Kind of a Big Deal to refresh your memory).

Obviously, the Arapahoe County Fair homebrew competition is not nearly as big as the NHC. I don't know how many entries there were, but it seemed to be decent sized. According to the score-sheets, the judges really liked the beer. There was nothing in the comments to give a clue on how to improve this beer.

I remember when I first tasted it, I thought it was exactly what I thought a Maibock should taste like. At the time, I thought it was too bad I did not have it ready for the NHC. It is good to get the validation from certified judges.