This year, I didn't have nearly the selection of IPA's in my fridge that I had last year. However, last night I stopped by the liquor store after working out and did a little impulse buying. 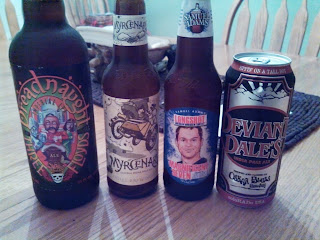 
3 Floyds Brewing Company Three Floyds Dreadnaught Imperial IPA ...  9.5% ABV 99 IBUs. I asked my brother-in-law to try to get me some Zombie Dust for my Zymurgy List, but he was unable to get it. The beer guy at the store told him I would probably like Dreadnaught. I have not tried it yet, but I am sure I will like it. According to the 3 Floyds website:  "A hophead’s dream beer. This Imperial India Pale Ale has an opening salvo of mango, peach and citrus hop aromas that sit atop a pronounced caramel malt backbone. Although Dreadnaught is a strong and intensely hoppy ale, its complex flavor is both smooth and memorable."

Odell Brewing Company Myrcenary Double IPA ... This beer is on the Zymurgy List, the only Colorado Beer on the list that I have not had yet. 9.3 abv, 70 IBU: "Named for Myrcene, a component of essential oils in the hop flower, Myrcenary Double IPA is our tribute to those who revere the illustrious hop, and their unyielding exploit to craft hop forward beers. Brewed with a blend of hops containing the highest levels of Myrcene, this double IPA prevails with a tropical fruit-like flavor, a pungent floral aroma, and a clean getaway."

Sam Adams Longshot Magnificant 7 ...  2012 Longshot winner Zack Adams brewed this. Quite frankly, this is my favorite of the 2012 Longshot six pack, and probably my favorite of the last few years. "Zack and his friend Pat decided to create a brew loaded with their seven favorite hops.  A showcase of US hop varieties and true to an Imperial American IPA,  this beer has a big grapefruit, pine & resinous notes." 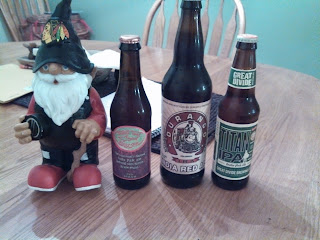 Dogfish Head Sixty-One Minute IPA ... Impulse buy at the liquor store last night. I was really glad I did. I am declaring this my favorite DFH beer. "The name Sixty-One is a reminder that this beer is Dogfish Head’s best-selling 60 Minute IPA plus one new ingredient: syrah grape must from California."

Durango Brewery India Red Ale ... Another #IPADay eve impulse purchase from a Colorado brewing company. At the moment I cannot find this beer on their website, but the bottle says "Durango decided to take hops 'into the red' with this beer. Copious amounts of Columbus, Chinook, and Cascade hops are balanced by a layered malt profile. The IRA is finished with a massive dry-hop approach that brings out aromas of citrus and pine. Yeah it's good!"

Great Divide Brewing Company Titan IPA ... The last of last night's pre- #IPADay impulse buys, and another Colorado beer that I have never tried. "TITAN IPA is a big, aggressively hopped India Pale Ale brewed for hop disciples. It starts out with piney hop aromas and citrus hop flavors, and finishes with a nice rich, malty sweetness that is balanced with crisp hop bitterness."

And that is all the potential #IPADay beers I have in my beer fridges. Which ones will I sample today? Stay tuned and you may find out.

Like last year, I have actually scheduled blog posts to publish throughout the day. Don't judge me. At least I'm not doing this at work. You can see all I have written or will write about #IPADay at: http://blog.ericshepard.com/search/label/%23IPADay 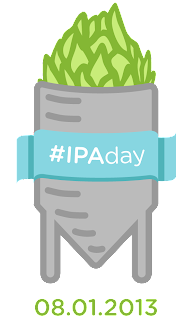