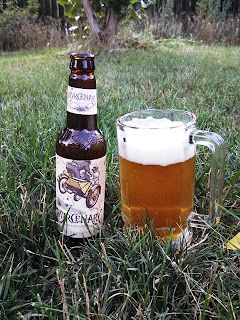 There are lots of beers I absolutely love from Odell Brewing Company in Ft. Collins, Colorado. In fact their IPA is #1 on my Colorado 6 pack list. I am sure if I had tried Myrcenary before doing that list, I would have seriously considered adding this beer to it.

It is a great beer.

According to the Odell web site, the beer is "named for Myrcene, a component of essential oils in the hop flower" and is "brewed with a blend of hops containing the highest levels of Myrcene".


It does not say what hops are in this blend, but whatever makes up the hop schedule comes out absolutely fantastic in this beer.

It is nice and citrusy like all American IPA's, but I got a lot of bright, fresh topical fruit flavors (pineapple, mango) rather than just the normal grapefruit. I did get some tangerine and maybe a bit of lemon. Really, a wonderful hop flavor and aroma. It is a big beer at 9.3% ABV, but certainly does not taste that big. At 70 IBU's, it is not really all that bitter for such a high alcohol beer either.

Myrcenary is tied for #42 on the list, but I would drink this in favor of Pliny the Elder any day. Interestingly enough, just the other day, one of my favorite beer bloggers, BillyBrew did a blind taste test which included some of the country's most popular double ipa's, including both Pliny and Myrcenary. Myrcenary came out #1. Pliny didn't make the top 3. See BillyBrew's IPA Blind Tasting: Cutting Through The Hype for more on that.

In case you can't tell, I really like Myrcenary. It is sort of sad that I have never had it before.

If I am counting correctly, I still need to try 7 more beers on my list.

Of course, you can always check the latest on my quest to drink the beers on this list by going to this link:
http://blog.ericshepard.com/search/label/Zymurgy%20BBIA
Posted by ESheppy at 8/26/2013 06:18:00 AM