Last Sunday, after my brew day, I decided to go on an afternoon bike ride.

There is a brewery in Englewood that was celebrating its one year anniversary called "The Brew on Broadway" aka "The B.O.B.". Until a few days ago, I did not realize it existed. Actually, I was probably aware of it at some point, but it was not part of my current consciousness until I saw posts and tweets mentioning its anniversary weekend. 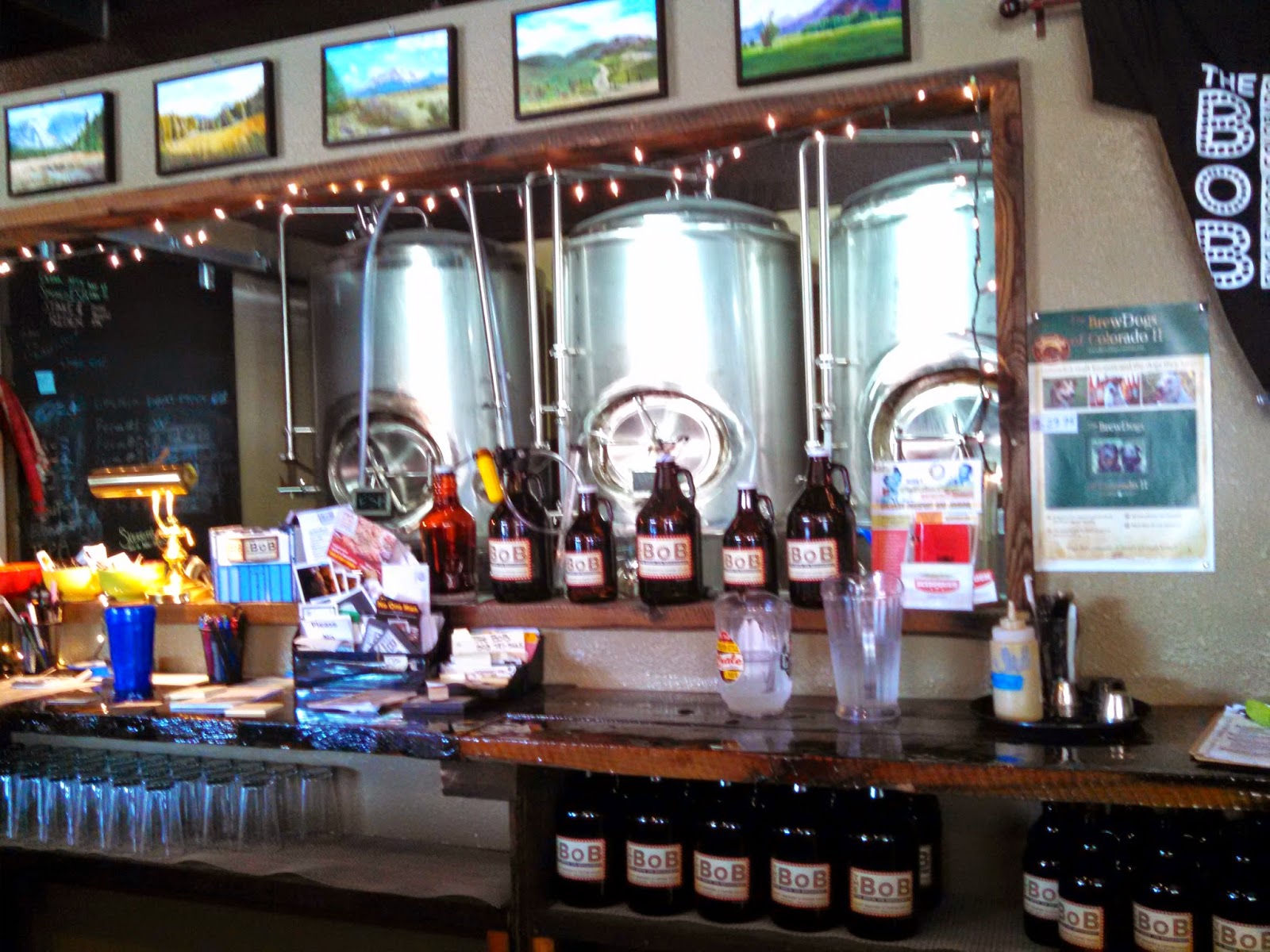 Lately, I've actually been surprised to discover a few new breweries in the South Denver metro area. I used to think I was pretty good at keeping up with new breweries. Lately, I am beginning to think my feeble little mind is having a hard time keeping up just due to the ridiculous (in a good way) number of tiny little local breweries opening up in and around Denver.


I need to make sure I read Fermentedly Challenged every day so I don't miss these breweries opening up close to me.

Regardless, I had never been to this brewery. Shame on me. It is only an 8 mile (give or take) bike ride from my house. Not only is it only 8 miles, but it can be reached almost entirely by bike path. 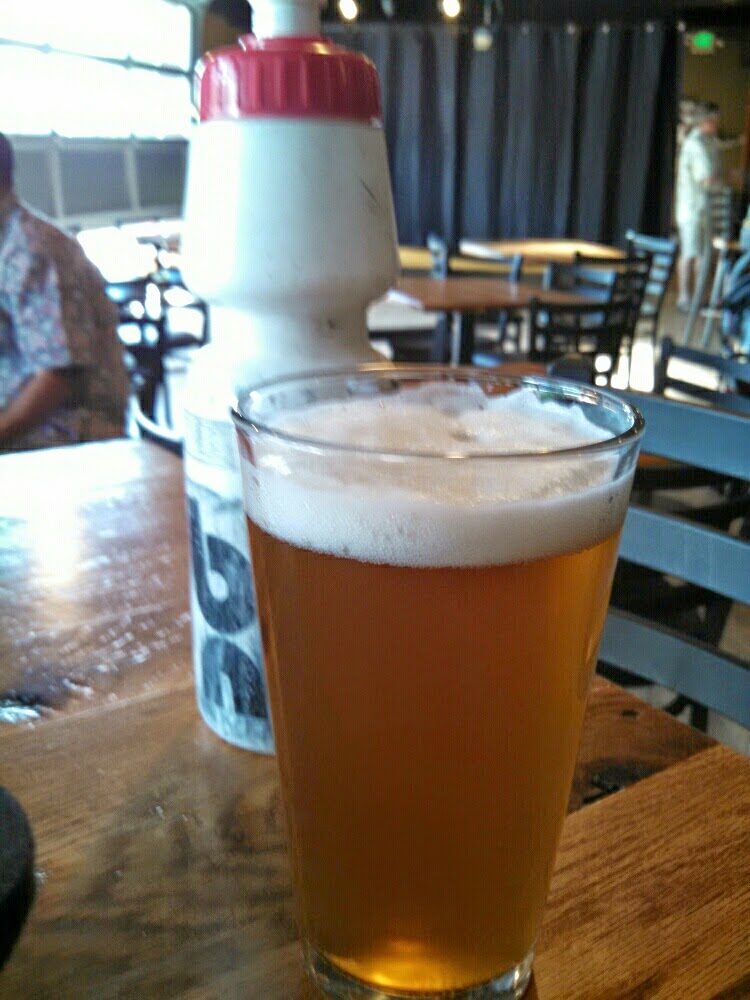 So, I made this brewery my Sunday bike destination, and I'm really glad I did.

The location is downtown Englewood, very close to the light rail station that I use when I take the train to downtown Denver. The actual building used to be a music store. In fact, I bought The SheppyBrew Beer Model's guitar at that store.

If you want to see my wife playing her guitar, check out the videos on Guitar Lady Goofy Kid.

So, anyway, The BOB is in a cool old building. The unique thing about this brewery is that it is also a coffee shop. Because it is a coffee shop, its hours are longer than your typical brewery's. Mist days, it opens at 7 or 8 am. Once I saw this place, the coffee shop/brewery tasting room combination seems like an obvious symbiotic relationship, but I think this is the first such combination I've heard of. I know it is the first one I've been to. 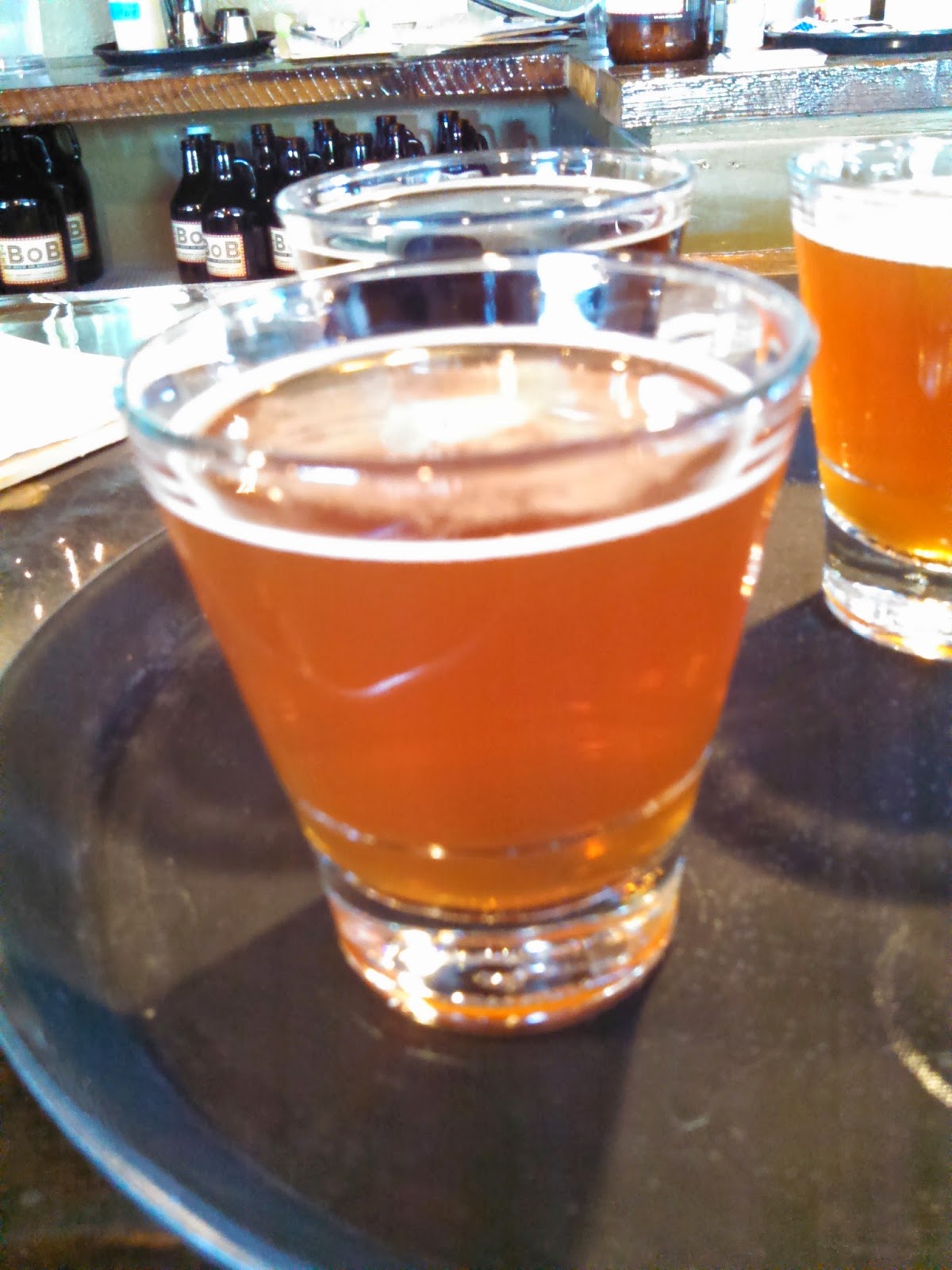 The bike ride was good. It was a very hot day, but 8 miles is not too bad, and as I mentioned, the ride is mostly bike path for me. From my house, I get to Bear Creek Trail as quick as I can. I take that to the Platte River Trail. Then I make my way over to Broadway on side roads. Petty easy. Wouldn't even have to break a sweat if you choose a cooler day than I did. 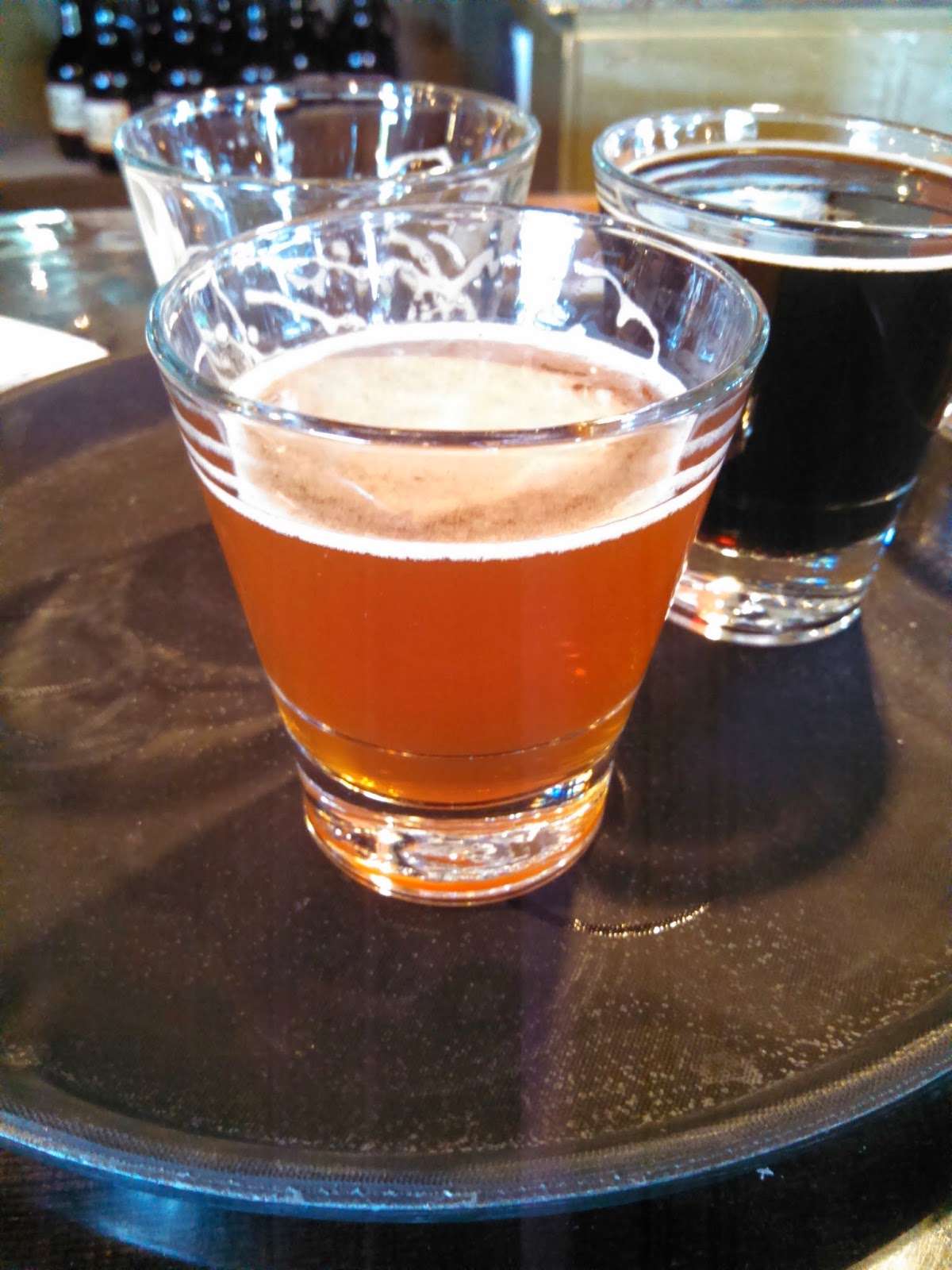 Originally, I figured I would have one pint and leave. I figured that I would go with something light and refreshing and picked Shadyside Blonde DHA (Dry Hopped Ale). To be honest, I really liked this beer. It has a bit more hop presence than your typical blonde. It had a nice malt flavor. It was really nicely balanced. I had to try more beers.

So, I had the bar tender get me 5 ounce "tasters" of Placer ESB, Eaglerock Pale Ale, Tuileries IPA, and Social Club Coffee Milk Stout. You can read descriptions of all their beers on their beer page. You really should. Most of the beer names have a bit of a story behind them. Pretty cool.

The bartender cheerfully kept my water glass full of ice water. It was nice not to have to ask. She also offered to refill my bike water bottle. I did take her up on that offer.

I liked all the beers I tried, but the one that stood out was the Social Club Coffee Milk Stout. It was my favorite. If you like coffee stouts and find yourself in Englewood, CO, you have to stop by and give it a try. 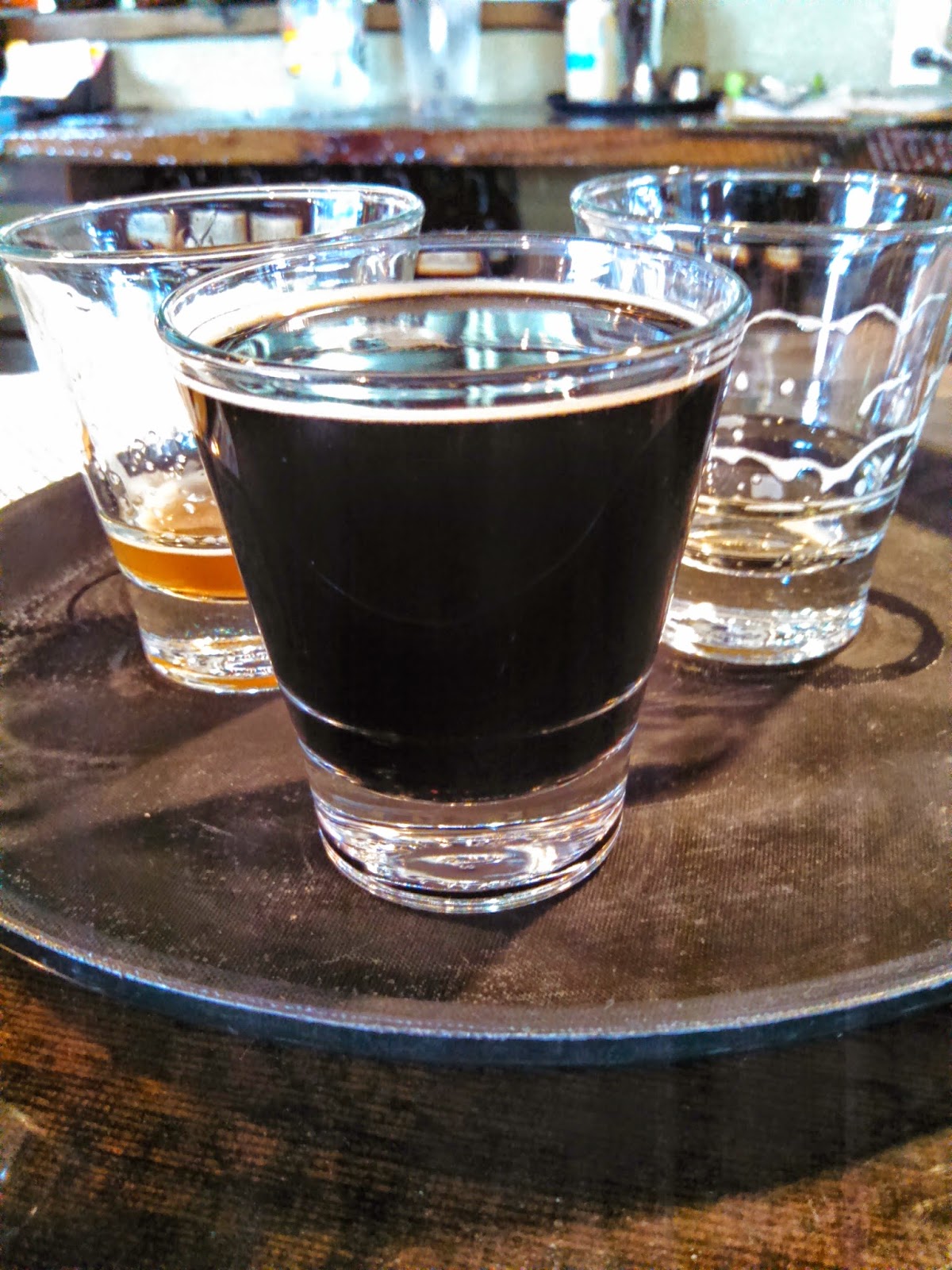 They had more beers, but there was no way I was going to try them all. With the temperature at 95 degrees, knowing I had to ride home, I simply had to promise myself I would return soon to try more.

I think   "The Brew on Broadway" is now my favorite of the new South Denver Metro neighborhood breweries. Check it out if you get a chance.

By the way, their AHA discount is $1 off pints, which is a really good deal for those of us with an aha membership card.

Apparently, they are big into live music. Check out their website for information on best times to enjoy that. There was not anyone playing while I was there.

Even if you don't like beer (can't imagine, but I hear there are people who don't), try their coffee.