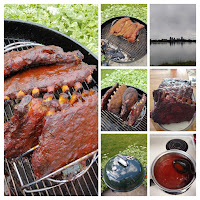 One of the things my kids got me for Fathers' Day was a Weber Rib Rack.

It had been awhile since I'd smoked ribs at all, and I had to try this new toy out, so the weekend after Father's Day, I fired up the Weber Kettle and used the new gift.

I bought a couple of Spare Ribs from Sam's.

I prepared the ribs as usual, except I cut each of the racks in half and put them in the Weber Rib Rack on the indirect side of the kettle. I used a combination of Hickory and Apple wood for the smoke. 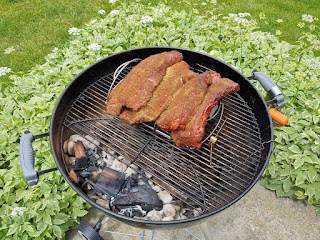 I know the 3 - 2 - 1 method of cooking ribs is somewhat popular, but that doesn't ever work out for me. It is always too long.

2 hours on the initial smoke. 2 hours wrapped in foil. 1 hour to finish up the ribs with barbecue sauce on them. 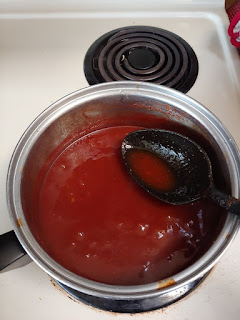 Of course, I made my own barbecue sauce, and of course, I did not really pay attention to exactly how I made it. But, if you are interested ... the basics of the recipe are the same as on this blog post. Sort of. 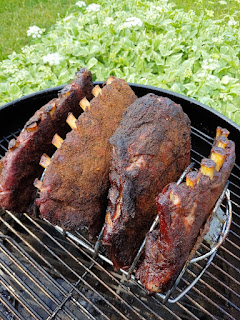 At the two hour mark, I wrapped them in foil with a bit of honey and some kombucha and a bit of butter in the wrap.

I let them cook another two hours. 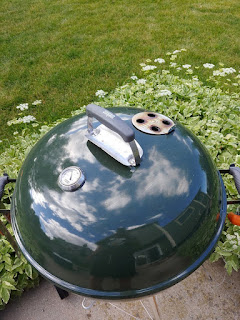 I unwrapped and slathered the barbecue sauce on them.

Then I let them cook another 45 minutes or so. 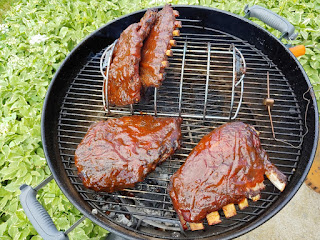 Pulled them. Let them rest for maybe 15 or 20 minutes. Then we ate. 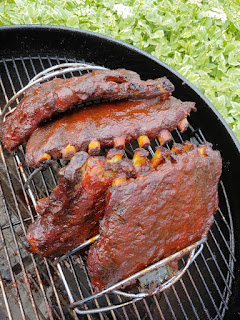 These were the best ribs I've made so far.

I'm not sure if it was the rack, or the racks cut in half, or the shorter cook, or the barbecue sauce, or doing it on the Weber, or a combination of everything, but these were fantastic. 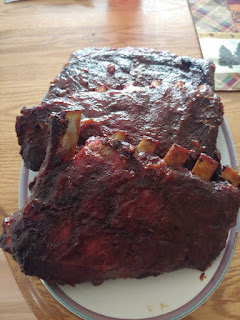 My family really liked them too, but my younger child mentioned that he prefers his ribs without barbecue sauce.

I can respect that. I'll have to remember to not put sauce on one half - rack that next time I make ribs.

One thing I really should have done was put down foil in the bottom of the kettle to help with Sauce cleanup. It was pretty messy. I know better; I just forgot this time.

I want to use this again soon. I think next time, I want to make baby back ribs and see how they fit into this rack thing.