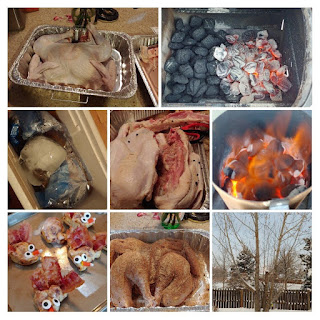 Well ... you may remember that last year I smoked my first Thanksgiving Turkey.

In Cherry Wood Smoked Thanksgiving Turkey, I mentioned that I would probably spatchcock the bird next time I smoked a Turkey.

Well ... this Thanksgiving, was my second opportunity and I did indeed spatchcock the bird.

In case you don't know what spatchcocking is ...

Real quick ... when you spatchcock a bird, you basically cut out its backbone, which allows you to lay the bird flat while it is cooking.

Some people call it "butterflying" the bird.

People do this because it is supposed to more evenly cook the bird. It is also supposed to speed up the cooking process.

To be honest, I've tried it with chickens, and have not found that the spatchcocked chickens turn out better than my "regular" method of cooking a bird.

After this Thanksgiving Turkey ... I am still of the opinion that I prefer birds that were not spatchcocked. 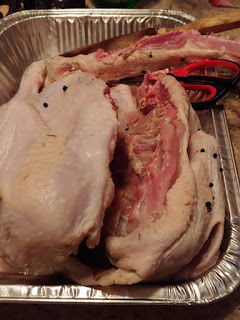 But, anyway, I started a little before 7AM. I pulled the turkey out of the brine and dried off the liquid.

Then, I cut out the backbone. This was more difficult on a turkey than it has been on chickens, but really not too terribly bad. 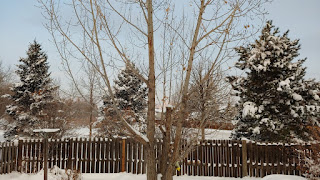 I applied a rub. Not sure what all was in it. Onion and Garlic powder for sure. Probably at least some salt and pepper.

It smelled and tasted yummy. 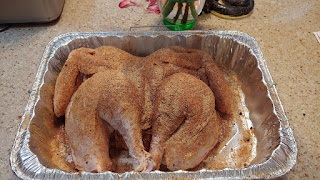 I started preparing the fire a little before 8:30. 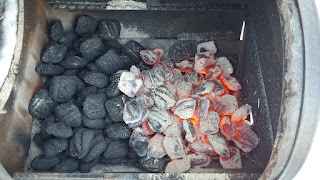 Had charcoal lit. Cherry wood added. And Bird on the smoker by 9:10.

Even though lots of people say that spatchcocking makes the bird cook quicker, I gave myself an extra hour more than I did last year. 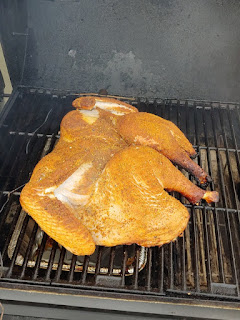 Around 10:15, I wrapped the drumstick tips in foil to prevent burning. I probably should have done that a little earlier, but that's ok. 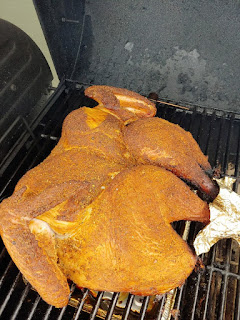 The bird actually seemed to cook slower this year than last. For whatever reason, I had a harder time keeping the cooking temperature as high this year. 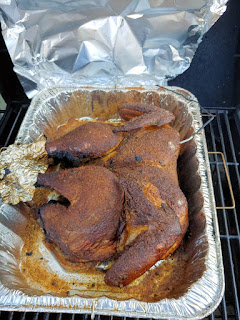 Eventually, I put the bird in a pan to catch drippings. I also wish I would have done that sooner. 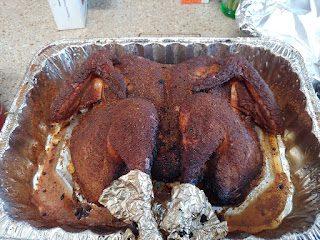 The bird was delicious. Either I'm not remembering correctly, or last year's was better. The breast just was not as juicy and tender ... even though I pulled off the smoker before I got 165 internal temperatue.

The bird was not brined for as long as it was last year, so that might have something to do with it.

Also, I had to watch the Bears beat the Lions ... I was distracted.

But, honestly, I'm just not seeing the benefits of the spatchcock.

Don't get me wrong, the turkey was wonderful. I just wish it were better.

So ... if we are at home again next year, I'm fairly sure I'll smoke turkey again.

Next year, I think I want to catch the drippings better (put a pan underneath earlier). And I will want to "tent" the bird when its color is a little less dark.

I might do a test bird or two before next Thanksgiving too.

Anyway ... I hope everyone had a wonderful Thanksgiving and will have a very Merry Christmas.