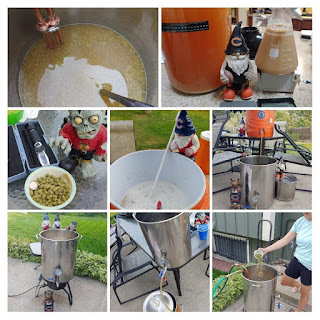 So ... if you've been following along on this blog, or SheppyBrew's Facebook Page or SheppyBrew's Instagram Page, you know that I've been playing around with Lithuanian Farmhouse Yeast.
The brewer / owner of one of my local breweries, Great Frontier, pulled some off his fermentor and gave me a quart of slurry.
It is one of those yeast strains that has evolved to handle hot fermentation temperatures with a fairly clean profile.
I've brewed a couple times with it, fermenting beer in the 80's and 90's (Fahrenheit). With that hot fermentation, the yeast rips through the sugars very quickly, and I've been able to get beers into the keg in 3 or 4 days.
The yeast produces a really subtle pepper flavor, similar to saison strains, but much more restrained. It also has a really nice citrus ester.
I thought the citrus of the yeast would compliment traditional American hops in a Pale Ale or IPA, and thought I'd give it a try in my homebrew version of Colorado Strong Pale Ale. 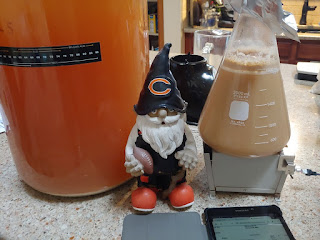 This weekend, I brewed this "Lithuanian Strong".
I had used the last of the yeast I got from Great Frontier, so I used yeast that I had harvested from one of my batches.
I made a starter and placed half in a mason jar for me to use on a future batch. The rest, I used in this batch of beer. 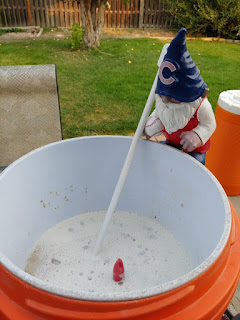 I started my brew day a bit later than my typical start time so that I could take advantage of the hot August afternoon temperatures to help drive my fermentation temperature up.
I think the high was 97 on Sunday. 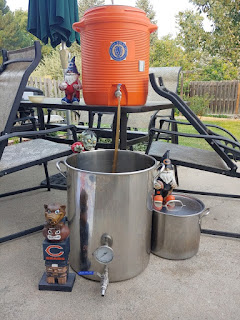 The mash went well. My pre-boil gravity and volume were right where I wanted them.
The boil went smoothly too. I got everything added right when it needed to be added. 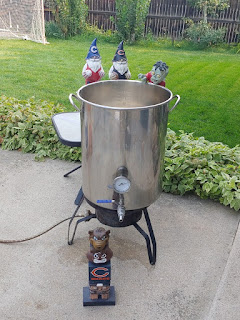 My wife (aka The SheppyBrew Beer Model) even helped by adding the flame-out "whirlpool" hops for me. 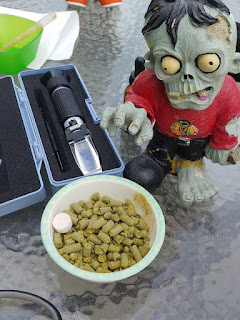 I chilled a little more than I intended, bringing the wort down to 80 degrees. The Hydra wort chiller is really nice, but there are times that it has been too fast for me. Not a huge deal. An 80 degree start was fine for this beer.
And ... as previously mentioned ... it was hot on Sunday. 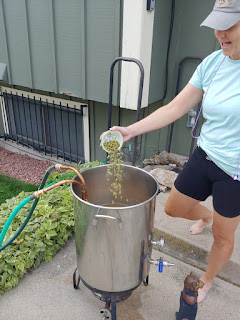 I got the beer into the fermentor and the yeast pitched around 11AM. I had things cleaned up before lunch.
Over the course of the afternoon, the beer temperature rose from around 80 to 88, and the yeasties took off. By dinner time, the gravity had dropped 10 points already.
By Monday morning, the tilt was reading 1.031 ... down from 1.053 OG. Over night the fermentation temperature did drop to the mid-80's.
I added half my dry hops pretty early Monday morning. 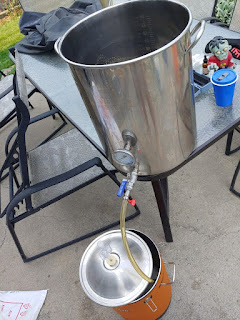 And now, as I type this post, the fermentation continues. By the time this get posted, I expect that fermentation will be about done. I'll probably keg this beer by the end of the week, at which point I'll add the rest of the dry hops.
I can't wait to try this beer. I expect it will be delicious.
Since I collected some of the starter yeast, I will certainly have to brew with this again. Bookmark Sheppy's Blog: Lithuanian Farmhouse to see what other beers I brew with this yeast.
As always, keep an eye on the regular SheppyBrew Channels to see what is happening with beer and other things: SheppyBrew's Facebook Page; Sheppy's Twitter Feed;SheppyBrew's Instagram Page; and SheppyBrew's Website. Of course, don't forget to visit this blog often as well!