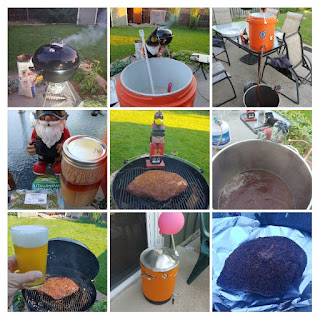 If you follow the SheppyBrew Facebook or Instagram pages ... you may have seen that I was able to pick up some yeast from Great Frontier Brewing Company.
Great Frontier makes a beer called "Lithuanian Farmhouse Ale".
It is my favorite beer they make, and I was interacting with the brewer / owner on facebook. He offered to pull some yeast from one of his tanks and let me play with it.
Of course, I didn't need to be asked twice.
I stopped by the brewery and as promised, he got me a mason jar full of the Lithuanian Farmhouse yeast.
The yeast apparently comes from a local Denver yeast lab, but isn't something they offer to just anyone.
I'm told they literally collected it from a farmhouse in Lithuania.
This Lithuanian Farmhouse yeast is similar to Kveik strains in that it ferments real hot (80's / 90's / 100's) and finishes in 2 or 3 days. Even at these ridiculous hot fermentation temperatures, it ferments (fairly) clean. 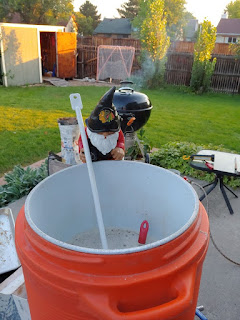 So, I had a quart of this yeast. On Sunday, I brewed with it ...
Sveikas Lithuanian Farmhouse 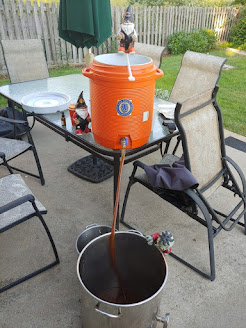 The recipe is fairly simple. The malt bill is similar to my Autumn Saison, which I believe fairly closely matched the Great Frontier Lithuanian Farmhouse Ale in color.
It only has enough Magnum hops to balance out the malt.
If it attenuates like the French saison yeasts, it should end up at about 6.5% ABV, but we'll see.
I didn't add any spices, so I could get a sense of the yeast flavor. 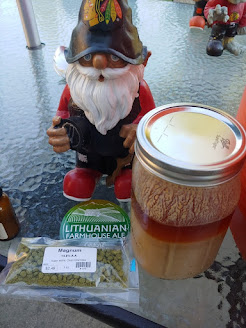 I got the brew day started around 6:20 AM. I also smoked a brisket flat, but more on that later.
My mash started just a little warm, but I cooled it down to 150 degrees. The brew day went smoothly. I started boiling around 8:25, and got my hops and whirlfloc into the boil fine. 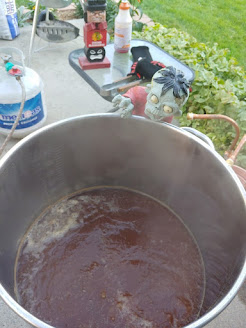 After the boil, I put the wort chiller in. I had to keep an eye on the temperature gauge to stop around 90 degrees.
And, I drained the wort into fermentor on top of about half the yeast I had collected from Great Frontier.
Around 9:45, I had the yeast pitched, and tilt told me that the temperature was 83 degrees. 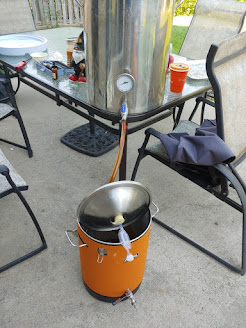 I let the fermentor sit out on the patio for awhile and then moved it into garage. The airlock was bubbling in no time at all.
According to the tilt, the fermentation temperature was up to 91 degrees by 8pm. The airlock was bubbling like crazy, and the gravity showed as low as 1.027 down from 1.053 by the time I went to bed.
The next morning the tilt read 88 degrees and as low as 1.015 on the gravity. 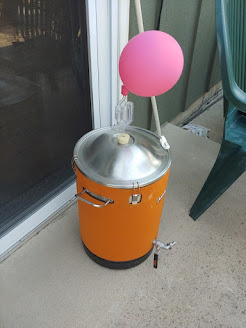 Less than 48 hours after pitching, the fermentation seemed about done. The temperature was still in the 80's, but the gravity read 1.009 on the tilt.
I have an empty keg, and I'll likely keg up this beer tomorrow.
I can't wait to try the beer. I might even bring it in to Great Frontier and share it with the brewer.
I still have about half the yeast I got from Great Frontier and am planning on harvesting more from this batch so I can experiment more with it.
I'll let you know how it goes.
Bookmark Sheppy's Blog: Lithuanian Farmhouse to see what other beers I brew with this yeast.
As always, keep an eye on the regular SheppyBrew Channels to see what is happening with beer and other things: SheppyBrew's Facebook Page; Sheppy's Twitter Feed;SheppyBrew's Instagram Page; and SheppyBrew's Website. Of course, don't forget to visit this blog often as well!