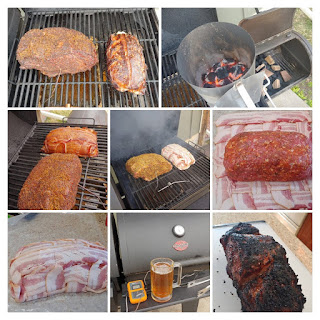 My wife (aka The SheppyBrew Beer Model) let me decide what to have for Easter dinner this year.
Awesome.
Around holidays, I enjoy getting Ribeye Roasts because they are generally about half the price as usual around holidays.
And, I figured I'd pick one up for Easter this year.
Because ... I like to cook them on my smokers. And ... because I really like eating them.
Yum!
When I got to my local grocery store to pick one up, there were two available. They were both around 12 pounds.
A 12 pound Ribeye Roast is more meat than a family of 4 needs, but I have a vacuum sealer and a freezer, so I figured I could save half for some other time.
And so, I picked up a 12 pound Ribeye Roast. I cut it in half, vacuum sealed one half and prepared the other to eat for Easter dinner. 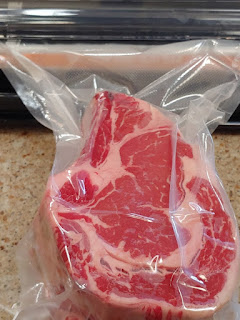 While at the grocery store, I picked up some ground Italian sausage and some bacon.
On Saturday, I thought ... wouldn't it be fun to have two "main" dishes at Easter dinner. I got the idea in my head to make a fatty along with the half Ribeye Roast. 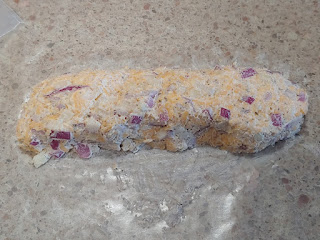 I mixed up cream cheese with oinions, garlic, cheese and various spices. I made a cool little bacon weave. 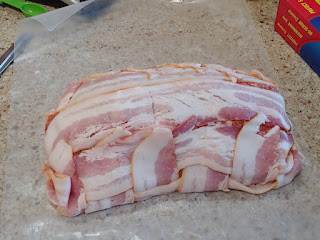 I wrapped the cream cheese mixture in a combo of the Italian sausage and some ground chuck.
Then I wrapped that whole thing in the bacon weave. 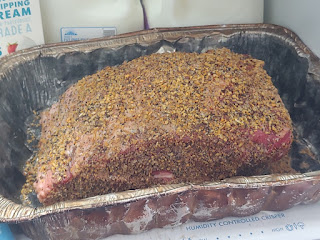 And, I also applied a rub to the Ribeye roast. 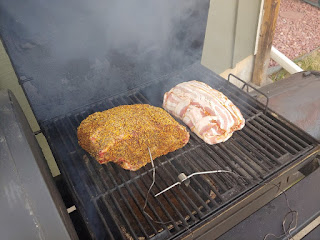 Sunday morning, I put both of these pieces of meat on the offset smoker. I put charcoal and hickory and mesquite chunks in the firebox. 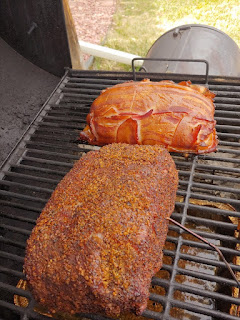 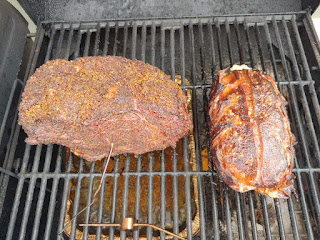 Then, I charred the roast directly over the coals on each side for a few minutes. 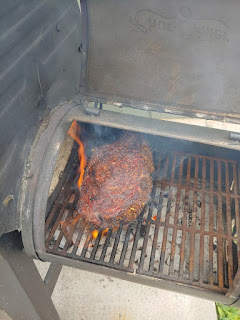 Both turned out great. I really like the combination of mesquite and hickory smoke.
The roast was a nice medium rare. Nice and juicy. 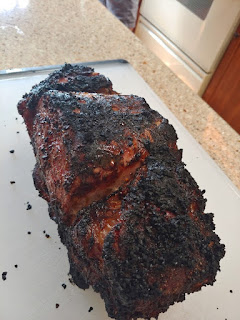 The fatty was crispy on the outside. Nice and gooey on the inside.
The ribeye roast was more of a hit for dinner. We had (still have) left overs to eat for lunches during the week.
The fatty is good for left overs, but nice quite as good as the beef. I think the next time I make a fatty, it should be the main dish. 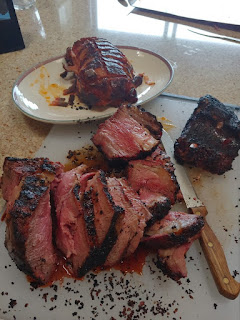 So ... Easter dinner was great. Much better than the ham that we probably would have had if my wife hadn't let me pick.