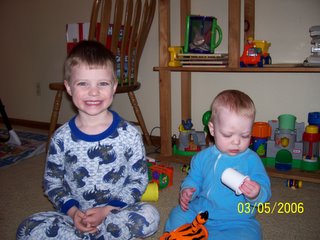 I was attacked and mauled by a couple of wild, vicious, African male lions in my own home yesterday after supper. It was a terrifying experience. One was much bigger than the other. In fact I think the littler one wasn't much more than a baby. He was, in fact pretty cute, but once he saw what the bigger one was doing, he joined in with a savagery that made me think he was trying to imitate the big one. Maybe they were brothers and the little brother was trying impress his bigger brother.

Anyway, the big one started by charging at me with a blood-curdling roar and his long sharp teeth and claws chomping and slashing toward me. I fought him off as well as I could. In fact, I felt I had things under control until the little one started in as well. The big one kept knocking me over and the little one kept clawing and biting at me while I was down.

The roars of these lions were enough to wake the dead. Actually, I don't think the little one would have been so bad, but when he joined in with the bigger, I really felt like screaming in terror. In fact, I did scream for help.

Another thing about wild African lions that surprised me is that they are surprisingly proficient at speaking English! I mean, I've seen Lion King, and those lions talked, but I thought Disney took some liberties when it made those lions speak. No, lions actually know English! The larger of the two lions kept saying things like "I'm a big male lion and I'm grumpy!" Even the little one seemed to say "Da Da Da Da Da," quite a bit.

I also found out that my wife doesn't really care if I get attacked or even eaten by wild animals. I keep screaming for help and she just kept on washing dishes. Washing dishes is one of her favorite activities, but I always thought that if my life was in danger, she would do something or at least be a little worried about me. She was so into her dishes that my cries for help barely even registered with her, and she just ignored my situation.

After what seemed like hours of unrelenting attack, I was finally able to stop the bloodshed by agreeing to read a children's' magazine to the two lions. The magazine had an article in it about lions. Apparently wild African lions enjoy hearing about themselves. I am battered and bloody, but I survived. I don't think I'll ever be quite the same, though.
Posted by ESheppy at 3/05/2006 01:05:00 PM