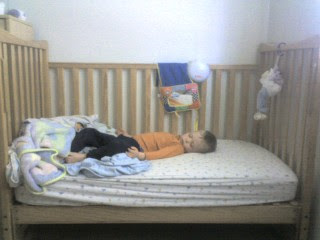 Here is a picture of my 3 year old boy napping in his "new" big boy bed. He made the "move" this past Sunday and was very excited about being able to sleep in a bed like Tyler's. Of course it is the same bed. The only difference is that I removed one side so that he is no longer contained. My wife was nervous, just like she was for Tyler when he got out of the crib, that Connor would abuse his new-found freedom and we would spend all kinds of time trying to get him back in bed. Just as was the case with Tyler, though, he stays there until morning. So far. At least this time we did not get a stupid side rail to keep him in bed. Tracy listened to me this time on that. This is quite a milestone as it is the first thing she has listened to me on since we became parents, possibily even since we got married or maybe even engaged.

That is probably not true. I am sure she has listened before; I just cannot think of a time.

So anyway, Connor is thrilled to be a big boy. Even his big brother is excited about Connor's big step. Tyler and Connor have been begging for permission to have a "sleepover" in Conor's room. Tyler had his sleeping bag set up all week so that should the parents agree, he would be ready. I finally gave in last night, and they had a great time. They were up earlier than I would have prefered but for the most part it was not even a problem for Mom and Dad.

Connor will be 3 tomorrow, but he is still our baby. And he is definantly less grown up than Tyler was at 3. He is liking that he gets to have a birthday and he appears to be more excited about the accomplishment of growing up even more than for cake icecream and gifts.

Our baby is so cute.