The picture below is one I took with my phone of "the other haunted house". The picture does not really do it justice, but this is actually two houses right next to other that obviously coordinate their Halloween decorational (decorational is not a real word) strategy. In fact, they go overboard like this for all the major holidays, but at the moment, it is obviously Halloween. The whole scene is like an army of goblins and ghouls and other evil creatures of the night.

What bothers me the most about this is that there are two people or sets of people who live next door to each other and coordinate this together. In fact, the two houses have a fence around the two front yards. There is no fence between the two front yards. My guess is that the two families are either very related (parents / children? brother / sister?) or some sort of freakishly friendly people. The other possibility is that both houses are owned by one person and as part of the lease, there is a clause that requires shared decorations. Actually, this is really sort of disturbing, but given the number of large decorations for EVERY SINGLE major holiday, I would not be totally shocked if one house was just storage for the decorations.

I think maybe next time we go by, I'll take my real camera and take a proper photograph of this abomination.

Anyway, because of their fascination with Halloween decorations, the boys have been busy with paper, canyons, markers, and scissors, busily making their own decorations and taping them ALL OVER THE HOUSE. Every few minutes there is another skeleton or witch (or whatever the weird frightening things that Connor draws are) somewhere. I guess it keeps them off the streets and out of gangs and stuff... but really... enough already. I am ready for Halloween decoration season to be over so they can move on from this phase.

To the Thanksgiving decoration season. 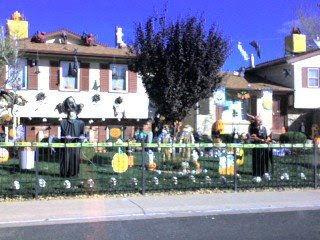 I've had a good couple of days for strokes to my ego.

I had a Silent Auction last night. Every time we do Silent Auctions, we get tons of positive comments on the software system that we created. Last night, we got more than usual I thought.

Also, last night, the lady running the arc-thrift silent auction that I was working asked me "what are you, 23?" ... as in she thought I was 23 years old. I don't think she was being sarcastic. I think she honestly thought I was much younger than I am. And, she is only 41 herself (I'm 38), so it is not like she is some old woman whose perspective is of an ancient woman who just thinks everyone is a kid compared to her. As far as I know, there was no reason for her to "suck up" to me.

This morning, I was forwarded an email referring to the project that I am currently working on for CHFA as "the extreme upper limit to what is possible to technology". The comment came from a group from another HFA (New Hampshire's) who had come by yesterday to talk to CHF about this solution. I am not sure I can think of a better compliment than "extreme upper limit to what is possible to technology". The extravagance of the compliment probably has a lot to do with the lack of technological sophistication in their custom development environment, but still that is quite a statement for the resulting software product that I had a huge part in developing. And, for the time being, I have decided to ignore the questionableness (is that a real word?) of the source.

AND... this morning, I read a blog which is completely dedicated to me being right http://bluefield5.blogspot.com/2008/10/my-brother-was-right.html. Well, maybe it is not completely dedicated to that, but it is titled "My brother was right" and in this case "My brother" is me. I was right about something !!! It does happen every once and awhile, but even when it accidentally DOES happen, I rarely get blogged about. (this might be the first time there has been a blog entry about me being right about anything).

I'm not sure what processed me to do so, but I went to Classmates.com the other day. I thought I had signed up for their free service years ago, but apparently I was mistaken. I signed up and looked at some people from ZBTHS , class of 1988. The free version of the service is a fraction of what you get if you pay. Some of the people I read up on had some interesting things to say. Most (like me) really do not say much.

But, today I got a message in my email telling me that 2 people had signed my classmates.com guestbook. "Wow," I thought, "I didn't realize I got a guestbook with the free service". Well, it turns out you have a guest book, but can not look at it unless you pay. So, two people have signed, presumably saying "hi" or "how are you doing" or maybe "hey don't I owe you 1.2 million dollars ... here is my phone number ... call me and I will write you a check". But, now I will probably never know what they had to say. Part of me really wants to know what someone put in my guestbook. But, I cannot bring myself to pay for something like that. Google's BlogSpot (basically all of the Google products) sort of spoil people like me. Why would I pay for something like Classmates.com when google gives all these great things for free? If one of the comments is someone wanting to give me the 1.2 million dollars, of course I better pay Classmates.com, but there is a slightly higher probability that it is someone I don't even know from Waukegan East saying "ZBTHS Sucks" or something else completely uninteresting.

I tried updating my "story" to point people to my blog so that anyone who comes across me on Classmates.com can end up here and leave me any comment they want. The site prohibits any web urls in the profile, so I could not do that. I left a couple of keywords to "google" to find the blog. So, maybe someone will see that and try leaving me a not here. Probably not, though. Anyway, even though it probably should not be, this is a slight ego boost as well. Someone loved me enough in high school that after just a day or two of being on the thing, I got two messages (one of which is likely someone who wants to give me money).