We rode our bikes yesterday to the "Cowboy Playground". It actually took me a little while to figure out what Tyler and Connor were talking about when they suggested that be our destination. I am not 100% sure I know how to get to this place by car. Its right along a bike path that I use a bunch, but I have never driven here. If I had to drive here for some reason, I could probably figure it out, but it would probably take me awhile. 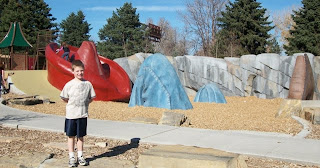 So, in the picture above, the red thing behind Tyler is a slide that looks like a cowboy hat. The two blue mounds are knees covered in blue jeans and the brown thing sticking up on the very right hand side of the picture is a huge cowboy boot. A giant cowboy is taking a nap and he has been sleeping so long beside the Bear Creek that he is partially buried. In the picture below, we are sliding down his hat. It is a pretty cool playground. 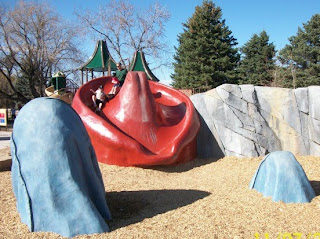 There were apparently a lot of guys named "Daddy" there yesterday. Very confusing. When I hear "Daddy", I almost always assume someone is talking to me. I even pushed one little kid on a tire swing for 5 or 10 minutes before we realized I was the wrong "Daddy".

Usually at the playground, I am the biggest kid on the playground equipment. Yesterday was no exception, but this time there were kids (most of them seemed to be the ones with MY name) that were almost as big as me playing up there as well.
Posted by ESheppy at 11/07/2009 05:17:00 PM