Well ...yesterday, on the way home, I stopped by my LHBS and purchased ingredients for my first all grain batch.  I decided to go with Buckwheat's BPA as my first attempt.

Today I brewed it up using my new mash tun and Bayou Classic propane burner.

The first step was to preheat the mash tun. I used about 3 gallons of boiling water to accomplish this. 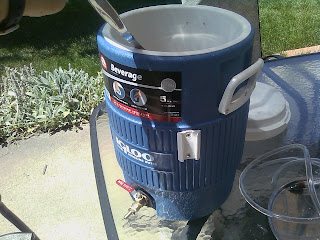 Next, I heated up about 6.5 quarts of mash water to a little over 160F. I put this in the tun (after emptying the preheat water). Then, I poured all the grain on top of the water, and mixed it all together. My target temp was 150, and my thermometer said 150. Not bad. Then, I let the mash sit for about 75 minutes. During that time, I poured myself and drank a Buckwheat BPA (from the last time I made it). Really enjoyed it. I also hydrated my yeast and started getting Rutt ready for fermenting (yes, I named my fermentors ... You have a problem with that?). 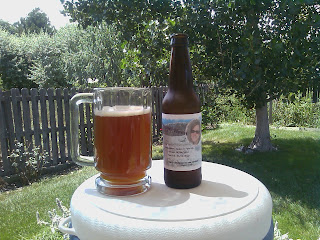 About an hour into it, I heated up my sparge water to around 170. I also checked the temp again. Still right at 150. I am happy about that.

Once the 75 minutes was up, I sparged and collected the wort. I eyeballed the water amounts on two sparges. Seems to have worked out. After the second sparge, I started my boil. Even though I used fermcap, I got a little boil-over. Think maybe I need a bigger pot. The propane burner sure puts out more heat than the stove top. 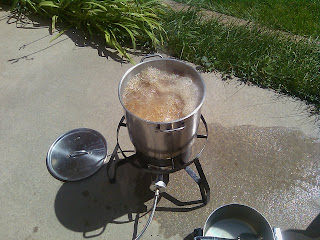 The rest of the boil went pretty much as planned. Hops at 60. Irish moss at 15. Yeast nuitrient at 10. More hops at 5. Had a 90 minute IPA and read a little while waiting.

After the boil, I did my ice bath outside as well. 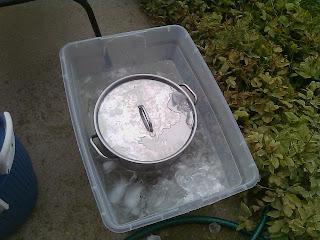 Filled Rutt. Put downstairs. Now I just have to wait for the yeasties to do their thing.

One thing I should note:  my mashing efficiency was horrible.  I was hoping for 70% (which is not that great) and only got about 61%.  I overfilled my fermenter a little, and the boil-over didn't help, so I figure the efficiency was not quite as bad as I saw, but still not great.

I will need to get that number up quite a bit to make this process "worth it".  One thing I forgot to do was stir in the sparge water and let it soak for a few minutes before draining.  So, I should be able to increase my efficiency next time just because I'll have a better process.  BUT ... I also think maybe I can improve the equipment a bit.  I won't go into details on that right now.

All-in-all I am pretty pleased with the way things went.  I do enjoy brewing outside.  I think my wife probably likes it as well as some of my later stages would have been during the time she was making dinner (tacos ... yum).  So, we were not getting into each others' way.
Posted by ESheppy at 7/24/2010 05:56:00 PM