Thanks again to Mr. Beer for inviting me to attend the GABF.  I had a great time, and I hope that I helped them out a bit as well.  If invited next year, I would not hesitate to accept the invitation again, but I do understand if they would like to give someone else a chance next year.  Even if I do not get tickets from them, I will use them as sort of a "home base", because I really thought a huge part of the fun was hanging out with the Mr. Beer employees and talking to the people who came by.  Oh!  I cannot forget to mention the pleasure it was to meet D-Rock.  He was the other Mr. Beer customer who got free tickets from Mr. Beer. 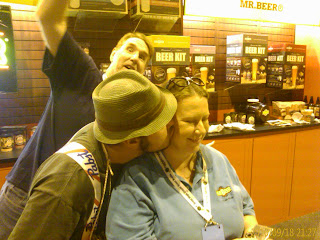 If I were to pay for tickets, Saturday night would not be the session that I would choose to go to.  The line to get in is longer.  The crowd is bigger and many of the beers have run out before that session.  There are also more drunk people, and someone stole a couple of my hats at this session, which was the only negative of the whole weekend.  Considering I got over $255 worth of tickets, and a few free goodies from Mr. Beer, the loss of $25 or $30 worth of hats is disappointing, but not that bid a deal.

If I have to buy tickets next year, my first choice of sessions is going to be the AHA members only session on Saturday afternoon.  It just is not as crowded, and it is just a bit easier to take things easy and enjoy yourself.  I went and paid for an AHA membership in anticipation that this might be something I want to do next year.  While making the AHA intern give me the sales pitch, I ran into Erin Glass (the one who sat next to me flying home from TN back in June).  She remembered me after I mentioned that her baby had spilled wine all over me.  She introduced me to the great Gary Glass (her husband).

I never made it to Dogfish Head or Stone Brewery.  The line by Dogfish Head was just too long when I went by and I actually never figured out where Stone was (yeah ... I know ... what kind of craft-brew fan could I be if I didn't even find Stone?). 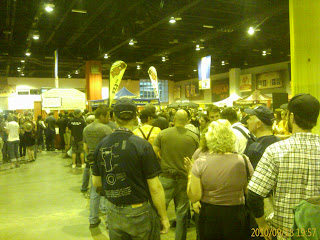 The brewery which I thought had the best line-up of beer was Sierra Nevada.  The only time I got close to them was during the member's only session, and I got samples from all their taps at that time.  They have a "project" type beer (small release, not on their web site) called Hoptenium (or at least that is what I wrote down ... it was close to that, anyway) which was just amazing.  Torpedo also stood out for me as really wonderful.  They won a gold for Sierra 30 Jack and Ken’s Ale in Category 11: Other Strong Beer, and a silver for Estate Homegrown Ale in Category 12: Experimental Beer.  Yes, I enjoyed those both.

I was really impressed with Alaskan Brewing Company's Smoked Porter, which is something I would not have even tried had it not been on my list.  I also had another Smoked Porter, called SUE from Yazoo Brewing Company  which was also fantastic, but not quite as good as Alaskan's.  The problem with "smoke" as a flavor is that if the brewer over-does it, it can be easy to ruin a perfectly good beer.  These two had the perfect amount of smoke, and as a result were very tasty.  Turns out the judges agreed with me.  Alaskan's won a gold and SUE won a silver in Category 23: Smoked Beer.

I had quite a few sour beers during the time there.  The sour style is not one I've tried at all until Thursday evening ... and the first one was accidental.  I just walked by a booth and asked the volunteer to pour me "some of that".  Surprisingly enough, I really do like sour beers.  Who knew?  The only ones I specifically remember were Eric's Ale (won a silver in Category 16: American-Style Sour Ale) and La Folie Sour Brown Ale, both from New Belgium Brewery.  Raspberry Tart, which is more of a fruit beer, I guess, but had the same pucker-your-lips feeling as a sour from New Galarus was good too.  It won a bronze in Category 3: Fruit Beer.  I really enjoyed all the sours I tried (probably about 6 or 8), and I wish I could give credit for them all ... I just did not take good notes.

Another style ... or actually more of an ingredient, I sought out was rye in beers.  I really like what rye can do to so many styles.  It sort of smooths out some of the flavors and helps give a nice full body.  It is very similar to what wheat can give you, I think.  I even had my Beer Model try a few Friday Night.  She has always been afraid to try rye in a beer because she doesn't like the taste of rye bread.  I think I might have broken her of that prejudice.  I'm not even going to mention any of these, because I'm going to leave most of them out.  Again, I need to take better notes next year.

I had a lot of IPA's (of course).  Both Lagunitas's IPA and Hop Stoopid were wonderful (I tried the IPA Friday and called it the best IPA on  my list and went back Saturday and thought Hop Stoopid was even better.  I also really thought the Hop Project from Yazoo was wonderful as well.  What really stood out to me on the Hop Project is the sign said it had 100+IBU ... and I tasted almost no bitterness (ok .. no bitterness compared to other IPA's).  The beer was also slightly sweet.  The brewer was not around to ask "how did you pull that off".  Apparently, Hop Project is a different experiment every time they brew it.  I wonder if I will like it as much next year.  None of the award winners in the American IPA were ones that jumped out at me.  I would not be surprised if I had them, just do not remember them.

Rahr & Son's was all over my list.  They only brought two of their beers to GABF.  Neither really stood out to me.  They were both fine beers, but sort of disappointing considering how many of their beers were on my (AHA's) list.

I tried mead.  Thought it tasted a lot like the mead I made awhile ago and dumped out.  Turns out it is not that I am a horrible mead maker.  I just don't like mead.

I also tried a Super Chili Pepper Madness from Mad River Brewing Co., which was just amazing.  Diane had me try one of Wyncoop's Chili Beers when Mr. Beer bought me lunch on Thursday.  It was great.  I came across this Super Chili Pepper Madness beer Friday night and immediately had another (and then another).  Then, I got one more to bring back to Diane.  We both agree that this beer was much better than Wyncoop's.  It did win a Bronze in Category 5: Herb and Spice or Chocolate Beer.

Surprisingly enough, there was only one beer that I thought "wow, that sucks!"  I won't mention the brewery or beer name (the other beers I had from this brewery were fine), but this one was an imperial stout.  I don't know if I just got a taste from a bad batch, but the flavor was dominated by a heavy (fusel) alcohol taste.  They needed better fermentation temperature control on their beer.  And, maybe that is what they are going for.  Imperial Stouts are supposed to be somewhat intense, after-all.

For those of you who come here because of links from the Mr. Beer forum:  Peter, Eric, and Diane tell me there are some pretty interesting things planned as far as expanding the product line, the brew club, and the overall web site and order placement system.  A bunch of the things that people have been asking for just are not possible with the software as it currently exists.  They are going to spend some time and money building a more reliable / function-filled system.  It sounds within the next year or so, they product line will be much bigger.  A bunch of the brew-club suggestions that have come up on the forum will be implemented.

Oh, and I also know what strain the Mr. Beer dry yeast is.

Here is a list of the other GABF blog entries I made this year:

So, all-in-all, it was a great time.  Thanks again to Mr. Beer, especially Eric, Peter, and Diane.  Thanks to D-Rock for pointing me to some really amazing beers.  Thanks to Tracy who let me go and even accompanied me to one of the sessions.  And, of course, thanks to my buddy Charlie and everyone else who worked so hard to put on the event.