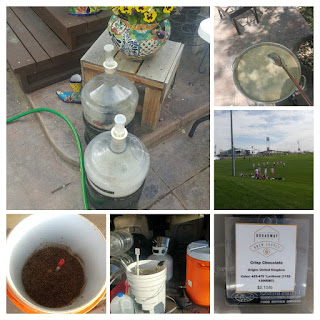 The 5th of May was the American Homebrew Association's Big Brew Day.

One of my Homebrewing Friends ("Doc") hosted an event at his house and invited me to brew at his house.

I usually brew alone, and I've never brought my equipment "on the road". Generally, I'm pretty inefficient at fetching and readying my equipment during brew day. I usually get the next piece of equipment or brewing ingredient "Just in Time", and quite often take several trips down to the basement rather than bringing everything up at the same time.

This helps my fitbit stats, but is rather inefficient. A manufacturing engineer would never approve of my process. A Time and Motion Study would yield all kinds of low-hanging-fruit-improvements to make the process smoother.

I don't care. It works for me.

However, it does mean that I'm not used to getting everything I need together for a brewing road trip. 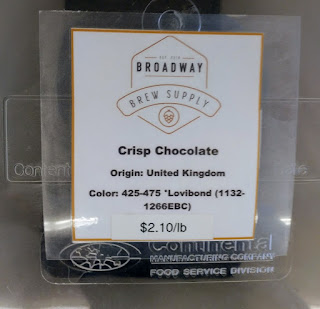 But I figured I could get enough packed that I would be able to borrow anything I missed. After all, Doc has a bunch of homebrew equipment too.

I decided to brew an Irish Stout:

On Cinco de Mayo weekend, my son had an ultimate Frisbee tournament. I decided that I would attend the first two games on Saturday and then head over to Doc's house.

Before heading over to the tournament, I started my mash. 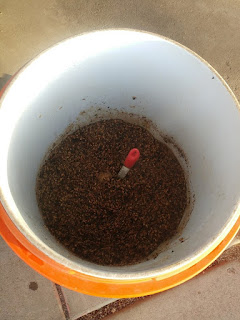 That way I would not be behind Doc when I arrived at the brew location. Obviously, this would mean a longer mash than usual, but I've done long mashes often enough that I know it doesn't cause problems.

I got everything packed into the back of the minivan and drove my son to the tournament. 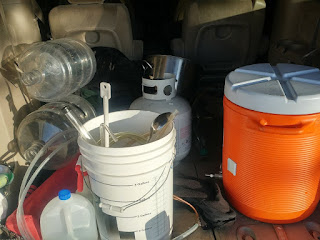 My son's team dominated both of the games I watched.

I headed down to Doc's house in order to arrive around noon. 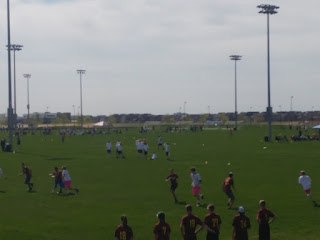 When I arrived, Doc and his assistant were still mashing their grains. I unloaded my stuff and heated sparge water.

My pre-boil volume was pretty low.

I found out that Doc doesn't have a refractometer when I remembered the first thing I forget.

No big deal. I just added water to get my pre-boil volume and assumed my gravity was ok. 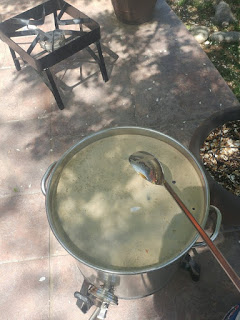 I quickly discovered the second thing I forgot. Doc also doesn't have FermCap. His brew-kettle is big enough to handle a full wort volume with lots of room left over for hot break.

No big deal, I just watched the boil closely so that I didn't have a boil-over.

We drank beer. We ate brats. We boiled. We chilled. 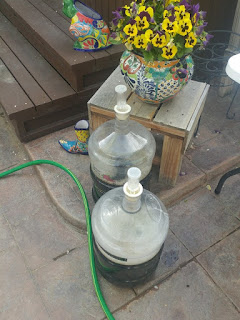 I had brought two small better bottle fermentors. I filled them each half way in hopes that this would prevent sloshing of wort into my minivan.

I pitched the yeast when I got home. I forgot to take a gravity reading. I'm just going to assume it is to plan. I'm not real concerned with the ABV on this beer.

The beer has been fermenting for the past few days. It appears to be done, and since I have an empty keg, I plan on kegging the beer tonight.

Anyway ... it was weird brewing away from SheppyBrew's Brewery, but it worked out pretty good.

I'll be sure to let you know how the beer turns out.