So ... about a month ago ... I brewed Foothills India Pale Ale, the second beer in my Homebrew Colorado 6 pack.

The recipe's base comes from the AHA's Zymurgy Clone recipe of Odell Brewing Company's IPA and was designed as a homebrew tribute to Odell's beer.

I kegged on the 8th of May, and added gelatin to help clarify the beer. On the 14th, I felt I was ready to give Foothills India Pale Ale a side-by-side comparison with Odell Brewing Company's IPA.

Of the Homebrew Colorado 6 pack, Odell IPA is one of the few that is available commercially year-round, so I had to take advantage of that.


Visually, the beer had not cleared up as much as I thought it would, but the color was actually pretty close if I took the haze into account.


Carbonation was close enough. I feel like the homebrew head was more substantial and long lasting.

My malt bill had a little more complexity with a bit of crackery flavor coming through. Odell's IPA came across as a drier finish.

If I didn't compare them side-by-side without looking at them, I would believe that Foothills IPA was an Odell IPA, but they were certainly different when drinking them at the same time.

All in all, I think it depends on my mood which one I prefer, but I think the extra malt flavor, more fruity hop flavor, and less bitterness all give the Foothills IPA the advantage in my opinion.


That is good, because I have a lot more Foothills than I have Odell.

NOTE ... 2 days later (see the May 16th picture compared to the May 14th picture), the clarity of the homebrew had already improved, and was much closer to the commercial beer. Because of improved clarity, the color was virtually identical. 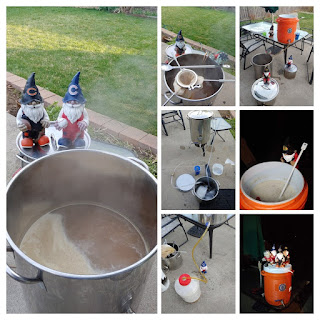 2 for 2 on the Homebrew Colorado 6 pack project.

Next up ... I expect to make SheppyBrew's Blackhawk Black as a tribute to New Belgium's 1554 Enlightened Black Ale.

Stay tuned on Sheppy's Blog: 6 Pack Project, and I promise you'll find out how it goes.