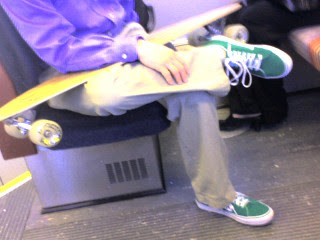 This guy has green tennis shoes on.

The green shoes do not go with the tan dockers, but I think the shoes themselves are pretty cool looking. It takes a little daring to pull off wearing green shoes. I bet most of the Red Wings would be afraid to wear green shoes.

My buddy KG wears green shoes now that he plays for the Celtics.

I do not really love the Celtics, but I do like Garnet and I dislike the Lakers, so I hope the Celtics win tonight. If not tonight I cannot imagine LA winning two in a row in Boston, but I suppose anything is possible.

Tyler gave Kobe Bryant a cool nickname Sunday night when we had our Father's Day dinner at Wild Wings. The NBA game was on and Tyler called Kolby "Micheal Jordan Wallaby". Of course he got that because he misheard me say Kobe was a Michael Jordan Wanna Be. We had also seen a bunch of wallabys at the zoo earlier in the day. I like Tyler's term better. I used it the rest of the game. I will probably call Kobe a wallaby quite a bit in the future.

I do not suppose Mr. Wallaby would get caught dead in green shoes.

I think I am going to get myself a pair of green shoes. Go Celtics.