Well, as I mentioned in a previous blog entry, I got a Mr. Beer home brewing kit for Christmas. Thanks again, Tera. Yesterday and today I spent some time on the web site. I was surprised to learn that Target carries Mr. Beer refills. That is nice to know. I guess Home-Brewing is pretty mainstream if you can get all you need at Target. I figured I would have to go to a special home-brewing store or order everything from the Mr. Beer web site.

Anyway, this morning, I started my first batch of beer. It was just one of the brew packs that came with the kit. Classic American Blond Ale. It is probably a nice start for a beginner. Thanks to the Mr. Beer packs, making the wort is extremely easy, and not really all that time consuming. At the moment, the brew is fermenting down in our basement.

As I look at the Mr. Beer website, I have all kinds of things I want to try. There are tons of different recipes on the website. I can experiment on my own with different flavors. There is a web page at the TommyKnocker brewery website that says to feel free to contact them for tips and recipe ideas on their beers, so of course eventually I'll want to try to recreate some of their beers. I just reserved a couple of books at the library that have recipes for popular beers. There are tons of things I want to do in my mini-micro-brewery.

But, I have to wait at least a week before I can even bottle my first batch. It is better to go longer, so I will probably let it ferment for at least 2 weeks. Then, carbonation takes at least another week. Again, I will probably want to let it go longer. Then, It will take me awhile to drink two gallons of beer. At the very soonest, it will probably be a month and a half before I can start my next batch. And, I was planning on just doing another standard batch on my second attempt. So, by the time I can start experimenting, it will be March or April; maybe even June. I want to get started RIGHT NOW.

This makes me think I need another kit or two. Obviously, it is premature to go that far. But, if I end up liking this as much as I think I will, at the very least, I need a second set or two of bottles . It also means I will have to think very carefully about what I will want to try. Each batch is at least a 2 week commitment before I even know what the beer will taste like, and that is too much time to waste on something that might not work out. Actually, everything I read makes me think that 4 weeks it really more realistic even for the simpler recipes and even more for more complicated ones.

Looking around on the Mr. Beer website and forums really gets me excited about this. I guess I have to be patient. 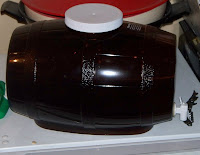