My recipe:
Directions:
Cook the brats and ground turkey on the stove with the spices.
Put it all in the crock pot, mix, and cook for 10 or so hours on low or 4 or so hours on high.

*Note: I never measure spices. I just dump how much I want into my hand. I would guess it ends up being about 1 or 2 table spoons per "handful", but I honestly don't know. 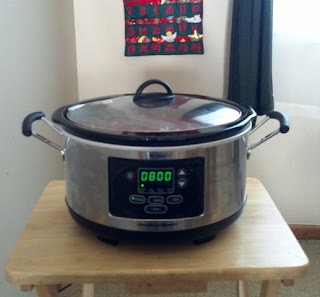 I actually made my competition batch on Saturday and ate some both Saturday and Sunday for dinner. I brought it into work in a Tupperware-like container to be heated up in the microwave. Everyone else brought in their crock-pots, which smelled awesome during the day, but put me at a disadvantage (I think).

My chili was really tasty. Originally came out more watery than I like my chili. I have some thoughts on how to fix that next time. I may share these thoughts, or I may lump them into the "some sort of secret ingredient or mix of ingredients not to be listed here". I bet you can't wait to read about it. Actually, it was watery when I had it Saturday. Less so Sunday. It was actually about perfect for the competition.

As far as the "Chili-icus Cook Off" competition, there were 10 entries. As as the results went, mine was voted 7th. All the chiles were very good, but, personally, I thought mine was easily better than everyone else's. Not to make excuses, but the placement of mine at the end (and the fact that it was not in a crock-pot like most of them) cost me some votes. A couple of people told me they missed mine until after they voted, and that they liked mine the best. Those two first place votes would have put me (I think) in the top 3 or 4. Oh well. I like mine.

Tim's strikingly mundane chili won (leave a comment if you come across this, Tim). Apparently, most of the voters did not find it mundane at all. Obviously, I don't know what makes great chili, because I ranked his towards to bottom of the pack. It was a very good pack, though.


In case you are wondering ... when I said "the former CEO of the company that I formerly worked for", that does not mean that he or I left the company. The owners (including him) sold the company to a much larger corporation. He used to be CEO, but is now "management" of a division in the larger corporation. I used to work for a little company, but now am part of that division of a much larger company. This is, in fact, by far the largest company by which I have been employed.

The former COO of the company I formerly worked for wants "us" (aka me) to brew a "a commemorative batch for the [two companies] union!"

Of course, when I asked for input on what an Acquisition Ale (need to work on the name) would be, I got no direction. I've been thinking about it since mid-October, and I am still not sure what this beer should be.

The thoughts I gave to the group were:

Or ... maybe I should just do another Stouticus batch. Or ... maybe something with Stouticus as the base and some sort of twist (eg ridiculously hopped or maybe a soured stout).

I don't know. If you have an idea, leave a comment.

I can also use help on names. Just brainstorming:
Of course, if I just ignore the request long enough, brewing a commemorative batch won't make much sense anyway and I won't have to come up with a recipe or a name.