You may recall that the Beer Model and I have a kid-swapping arrangement with another family. We take care of their two boys on weekends when the parents want to get away from the kids and they repay the favor by taking our two boys on other weekends.

The matriarch of this family (whom I have decided to name "Gretchen" on this blog and on the SheppyBrew website to protect the innocent) has a gluten sensitivity. This gluten intolerance sort of sucks (really really really sucks) as she likes to drink beer from time to time. After I rudely gave "Gretchen" and her husband beer as a thank-you after they had taken care of our boys over the 2011 GABF weekend, I decided to design and brew a gluten-free beer. I called it "Free the Glutens! APA".  You can read about it on this blog on the posts "Free the Glutens!" and "Tasting Free the Glutens".

Apparently "Gretchen" likes the Gluten-free beer. As I still had half the base ingredient (brown rice extract syrup) left, and "Gretchen's" birthday is coming up, I decided to make another batch this weekend.

My last real fruit beer was a failure. My fifth batch of beer in March of 2009 was called "Girly Berry" that I brewed with raspberry flavoring specifically for the Beer Model to enjoy. She didn't like it that much. After that batch, I changed the "Girly Berry" recipe by simply pulling out the fruit flavoring. The new non-fruit attempt turned out great, and so the subsequent batches of "Girly Berry" contained no fruit or fruit extract at all.

This failure was early on in my brewing career, but I have just never had the desire to try another fruit beer. Recently, though, one of the Pastors at my church (who will forthwith be called "Chad" on this blog so I don't have to keep typing "one of the pastors at my church") requested an apricot wheat beer, and I decided to go ahead and give fruit beer brewing another try. For Apricot Lovin', though I got some recipe advice from my LHBS and Dry Dock Brewing Company, so I think I should be ok.

Part of the recipe / process is adding 3lbs of Apricot Puree to a secondary fermentor and racking the partially fermented beer on top of the fruit. I had already decided to get another carboy, and so brewing this beer was an excuse to use a gift card I had for an order to Northern Brewer. The order came in this week, and on Thursday I finally added the fruit into the new carboy and put the base beer on top of the fruit.

I tasted the flat base beer and thought it was great. I face-booked "Chad" that if the apricot ruins the beer he can expect a couple of cases.

Despite the fact that I am quite sure no one cares, I've been sharing the badges that I've earned on Untappd (see First Month of Untappd and Running for Mayor @BallyFitness , and Some more Badges @Untappd ). I am not sure what is wrong with me. I just don't have anything interesting or insightful to write, so I just post uninteresting drivel like this. Hope you don't mind too much.

Bow before me fitness minions!


Remember, I made it my mission to become the foursquare mayor at my health club? (see Running for Mayor @BallyFitness)

After 60 days, I was still 1 day away from becoming the mayor. Back in December when I started the quest, the target was 30 times in 60 days, but the mayor I was chasing must have stepped up his game. I had checked in 37 days, and was still a day away. Bummer. I should have forced myself to get there more of those early mornings when I stayed in bed. 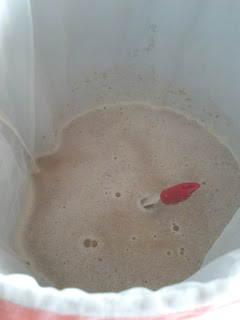 Sunday was another brew day for me. This time, I brewed the base beer of my Apricot Lovin' American Wheat. It might be a little early in the year to be brewing a fruity light colored beer, but that's ok.

At some point during the day, I realized that this is really the first fruit beer I've brewed since one of my greatest brewing failures: the first attempt of "Girly Berry". Hopefully this fruit beer will turn out better. I have actually used fruit (cherries) in some of my older X-Mas Ales, but I don't really consider those fruit beers because the fruit in those is subtle enough that the malts still dominate the flavors in those.

And why did I decide to brew a fruit beer? I first got the idea from one of the pastors at my church who wondered on my facebook wall if I could make a Pyramid Apricot Ale. Apparently, he had tasted some at a restaurant somewhere in the area and really liked it.

A few weeks ago I saw on my facebook news feed that Sierra Nevada was announcing that it had released its 2012 Bigfoot Barleywine and that I should be on the lookout for it as shipments made their way East. You may recall that Sierra Nevada Bigfoot Barleywine was on Zymury's list of the best beers in America, and that I am drinking my way through as many of those beers as I can. You can look at this blog's "Zymurgy BBIA" label to see what I wrote about my experiences with this list.

I called my friends at Davidson's Liquor store and asked if they knew when they would have Bigfoot on their shelves. The guy who answered apologetically told me that Sierra Nevada was not brewing a 2012 Bigfoot, and that Davidson would therefore unfortunately not be carrying it. Poor guy sounded pretty disappointed, and genuinely bummed out for me.

I shared the good news from Sierra Nevada's facebook page, which cheered him up considerably. Apparently he and his roommate are big fans and his roommate had told him that Bigfoot had been replaced this year. He happily went off to ask the beer buying manager when we could expect the Bigfoot to come in. The buyer didn't know, so I said I would check back later.

This past week I checked back, and yes, 6 packs of Bigfoot were indeed in stock and ready for me to purchase. Wonderful.

I got an email (see below) from Neil Zhang of the Asian Domain Registration Service in china.

He is trying to scam me. I doubt the emailer is actually named Neil Zhang and I am almost positive that he doesn't work for the Asian Domain Registration Service in china. He is simply a Tweedle Beetle screwing with me. It is fine. I'm used to it.

I looked it up. "Venus" by Shocking Blue was the #1 song on the day I was born.

Going to have to brew some more Quarter Life Crisis just for the hell of it.

Email ThisBlogThis!Share to TwitterShare to FacebookShare to Pinterest
Labels: Me

I got an email from my Contact Me form.

The email was from an employee at 5280 Magazine letting me know that their February issue contained an article about "The 35 Best Bars in Denver". I forget where exactly I read about it, but I do think I knew about the article. Well, I know I must have read it from one of the Denver area beer bloggers. I just don't remember which blogger.

You'll have to read the article to get most of the content. I'm embarrassed to say that I've only been to three of the 35 bars. I'm going to get this issue of the magazine, so maybe I'll use the article as a check-list and attempt to get to some more of the bars.