A few weeks ago I saw on my facebook news feed that Sierra Nevada was announcing that it had released its 2012 Bigfoot Barleywine and that I should be on the lookout for it as shipments made their way East. You may recall that Sierra Nevada Bigfoot Barleywine was on Zymury's list of the best beers in America, and that I am drinking my way through as many of those beers as I can. You can look at this blog's "Zymurgy BBIA" label to see what I wrote about my experiences with this list.

I called my friends at Davidson's Liquor store and asked if they knew when they would have Bigfoot on their shelves. The guy who answered apologetically told me that Sierra Nevada was not brewing a 2012 Bigfoot, and that Davidson would therefore unfortunately not be carrying it. Poor guy sounded pretty disappointed, and genuinely bummed out for me.

I shared the good news from Sierra Nevada's facebook page, which cheered him up considerably. Apparently he and his roommate are big fans and his roommate had told him that Bigfoot had been replaced this year. He happily went off to ask the beer buying manager when we could expect the Bigfoot to come in. The buyer didn't know, so I said I would check back later.

This past week I checked back, and yes, 6 packs of Bigfoot were indeed in stock and ready for me to purchase. Wonderful.

The Bigfoot is obviously a big Barleywine ale. Its ABV is listed at 9.6% with 90 IBU. It is a very full-bodied amber colored beer finishing at 6 plato (around 1.024 SG). The Sierra Nevada website tells us the beer is bittered with Chinook hops, finished with Cascade & Centennial, and dry hopped with Cascade, Centennial & Chinook. Obviously all the citrusy American "C" hops make it an American Style Barleywine. Its malt bill is pretty simple with Pale 2-row malted barley and English Caramel malt. 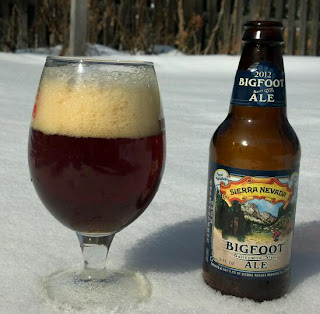 I poured my first Bigfoot into a New Belgium Globe. A thick off-white head formed quickly on top of the beautiful amber ale. This head stuck around throughout the drink. The lacing was just awesome.

In the aroma, the combination of malts and hops came through very fruity... almost a red wine type aroma with a bit of citrus (mango?). The combination was just fantastic and I thought unique. Certainly with more depth than your typical IPA.

I think every Sierra Nevada beer has a similar malt flavor, which unfortunately I cannot describe. This signature flavor is wonderful, and on top of this is a rich barleywine maltiness. It starts smooth and with caramel notes. The hops help finish the beer with a nice firm bitterness that dries out the taste a bit and nicely balances out the sweet malt-wine goodness. Obviously there is a bunch of alcohol in this beer, but other than maybe a bit more sweetness, I didn't notice it at all. It also did not "hit" me like some of the recent high-ABV beers I've discussed on this blog.

Overall, I think this is a great beer. I am very happy that I have 5 more to drink, and I am sure I will try to get some next year too.

The beer geek in me loves the youtube video below "The making of Sierra Nevada's 2009 Bigfoot Barleywine Style Ale". The same video is available on Sierra Nevada's Bigfoot page. I guess until I watched this, I didn't realize that they use open fermentation tanks. It is pretty cool to see the overflow.