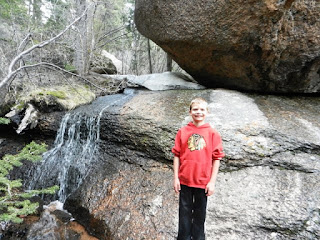 The little waterfall above is fun the tiny little stream that we used as a water source, although this picture was a bit downstream from where we camped. It is probably hard to tell unless you know to look, but that water is running under a patch of snow / ice. It is a wonderful sign that there is still some snow to melt in this area. Last year, things were much hotter and drier by this time of year.

It is also a great shot of Scooter's Blackhawk hoody. Incidentally, he got lots of compliments on that sweatshirt over the weekend. 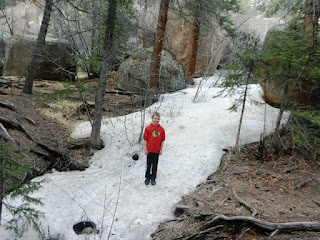 And the picture above is an even bigger patch of snow. This is an indication of there being lots of moisture, which is one indicator that the forest service declared the fire danger as "low" in this area. Last year, my son was disappointed that we didn't have any camp-fires while backpacking. Because of the low fire danger, I did allow one every night and every morning. My kid loved this.

Sunday morning, we packed up and hiked back toward the trail head so that Monday our final hike out would be shorter. Plus, it is fun to stay in different spots when backpacking.

Again, the boy did an awesome job hiking. We were targeting a spot we had come across in our explorations last year during First Family Backpacking Trip. However, that spot was taken when we got there.

And we had another issue. The creek was significantly higher than last year, and the "bridge" across the creek that we had used last year, just did not actually make it across the river anymore. We took a significant amount of time trying to find another way across the water, but eventually, Connor convinced me to wade across. I carried him, then his backpack, then my backpack. By the time I had everything across the river, my feet were freezing. 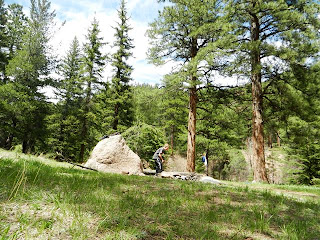 But we made it across, and then had some lunch. We ended up setting up camp in the same spot we stayed during First Family Backpacking Trip. 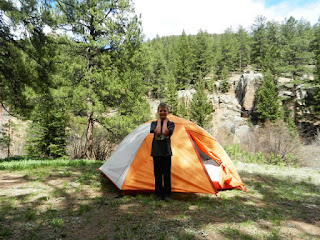 We spent lots of time around camp Sunday just relaxing. At one point for a pretty long period of time, Connor and I just lied under a tree looking up at the sky and talking about all kinds of things. I loved that time.

We also collected firewood, and Connor prepared the campfire ring. We decided to see if we could hike back to the trail-head on this side of the river. As it turns out, we could, but there were a couple spots where the trail was steep enough and loose enough that it probably was not a great choice with backpacks on. Good to know for the next day. 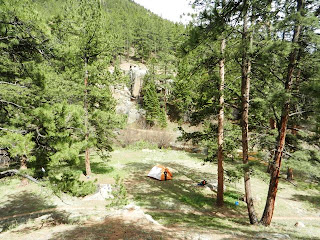 And, of course, we did some more exploring. We went up and down the creek looking for other potential future campsites. 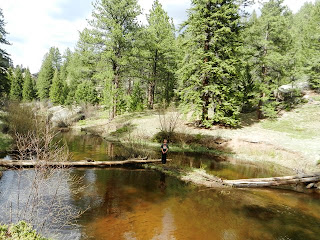 The picture above is a little island in the creek. That actually would have been a good place to cross that would have kept my feet dry. Good to know for the future. There is also a campsite to the left of my son that is pretty nice. Again, good future reference. 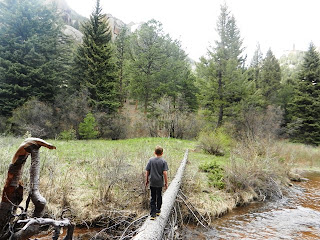 We went even further up steam and found another log over the water. This also brought us to a campsite that I never realized was up here. 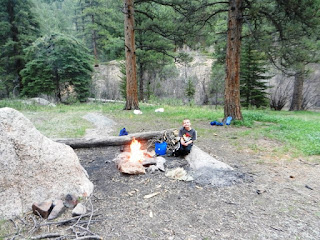 Eventually, we made it back to camp. We had some freeze-dried macaroni and cheese, and eventually started our campfire. We had lots of fun telling stories and just talking. Such a wonderful father-son bonding experience.

The next day, we got up pretty early and made another fire. Our location was such that it took awhile for the sun to clear the mountains to the east, and until that happened it was pretty cold in camp. Once the sun was completely up, though, we packed up our stuff. I waded across making three trips again to get all our stuff across. It took awhile to dry off my feet and get my boots back on, but we got underway at a decent time. 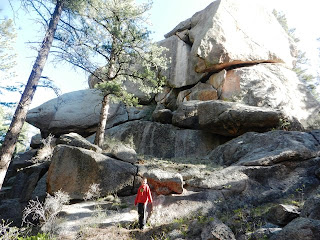 And the rest of the hike was pretty quick and easy. We made it back to the mini-van by 9:30, and were off the forest service roads by around 10. We stopped by the grocery store to buy food for our Memorial Day cookout, and were home in time for lunch.

My wife and older son were home.

Of course, I watched the Mighty Blackhawks defeat the Evil Redwings on the DVR from Friday night. I actually succeeded in not finding out the score. Unfortunately, I did know that the Blackhawks won ahead of time because I overheard a fire-fighter in the grocery store say that the Blackhawks were playing that night. (If the Blackhawks had lost on Friday, the series would have been over). So, I had the peace of mind of knowing that the Hawks would win. I just didn't know the score.

And then, later that night after our cookout, I got to watch the Mighty Blackhawks tie up the series. Excellent.

As you probably know, later that week, the Hawks won game 7 as well, which advanced them to the Campbell Conference finals against LA.

So, I had a completely awesome Memorial Day Weekend. I got to spend time camping with my son and the Blackhawks beat the evil Redwings. What more could I ask?

So there you go. I hope you enjoyed the conclusion of this episode of SheppyQuest Lite.

Also, let me know if you have a favorite back-packing spot, especially one that is good for kids. We really like the Goose Creek trail, but eventually we should probably try some other places as well.
Posted by ESheppy at 6/05/2013 05:52:00 AM