To be honest, I don't ever remember hearing of Wookey Jack. This is surprising as it is no secret how much I enjoy the Black IPA style of beer (just don't call them Cascadian Darks).

The Firestone Walker website says that Wookey Jack is an Unfiltered Black Rye IPA. It is their "first foray into the dark outer world of black IPAs". It uses rich dark barley malts and spicy rye along with American citrus hops (Citra & Amarillo) to bring the old boring IPA into a new level of complexity for my personal enjoyment. Yum. 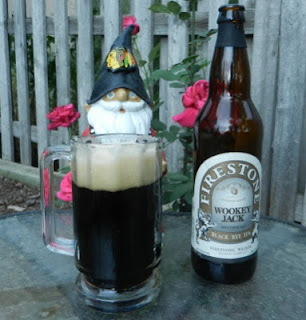 The beer is 8.3% ABV with 80 IBU. It is a very black 45 SRM in color. The website says the recipe includes Pale Malt, Malted Rye, Dash of Cara-Rye, Midnight Wheat from Briess, De-Bittered Black Malt, and a "Dash of Wookey dust". They use German Magnum for bittering and Citra & Amarillo for flavor and aroma. They double dry hop with the Citra & Amarillo as well.

In fact, I tasted it. It tastes like my kind of beer.

If I remember to vote next year, I think this will be a beer that I vote for.

The secret behind a great Black IPA (other than to make sure you don't name it "Cascadian Dark", is to not over-do it on the roast. Too much intense roasty (stout-like) flavors tend to clash with the citrus hops. In my opinion, this beer does a great job extracting the color from the dark malts without getting much in the way of robust stout flavors. The use of Midnight wheat (which I love to use for color without astringency) and de-bittered black malt really works well in this beer. I don't think they use a whole lot of rye, because it may be there in the background, but I don't get a whole lot of the spiciness from it.

Because of that lack the deep coffee flavors and the astringency that sometimes goes with it, the citrus hops compliment the grain bill and don't in anyway clash.  It does provide a nice layer without overpowering at all. I'm not convinced the double dry hop does much that can be picked out, but the beer is so good I would not mess with the formula.

I really don't know what "Wookey dust" adds to the beer, but again, if it ain't broke, don't fix it.

In case you can't tell, I like this beer. I personally think it deserves better than 20th place, but I am certainly glad it made the list this year. I probably would not have tried it anytime soon if it were not on the list.