Last Sunday (a week from yesterday), after I got done brewing my Rocktoberfest Lager, I decided to have a beer. For quite some time, there has been a bottle of Double Jack in my beer fridge and it called out to me. I decided it was finally time to pop it open.

You may remember that back in late June, I blogged about Union Jack. Double Jack tastes a bunch like Union Jack. It is 9.5% ABV, but does not taste like it at all. It is a bit dangerous that way. I am amazed how well this captures all the hop and malt flavors and aroma as Union Jack with much more alcohol. 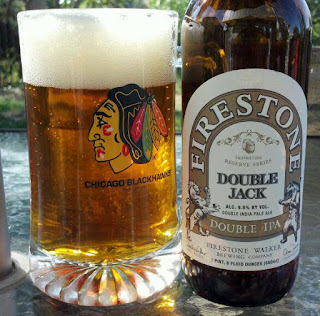 According to the Firestone-Walker webpage about this beer, it has 100+ IBU and uses Warrior and Columbus for bittering. Its late-kettle hops are Cascade and Centennial. They dry-hop this beer with Amarillo, Cascade, Centennial and Simcoe. They use a lot of each of these hops to get to that 100+ IBU level.

The beer is just slightly lighter in color than Union Jack. This is not something I noticed from memory, but the you can see it when you compare the pictures that I took of each beer.

Double Jack has a substantial malt flavor and aroma. The website says it contains Premium Two-Row, Munich and Simpson's Light Crystal. They must use a bunch of these as well to get the big alcohol of the beer.


Double Jack was a pleasure to drink. I am glad I go the opportunity and I will probably try it again and again.

12. Sierra Nevada Ruthless Rye (out of season, I think I need to start looking for that next spring)
15. Dogfish Head 60 Minute IPA (I should be able to find this in Colorado somewhere)
34. Troegs Nugget Nectar (not sure where I will get this ... hopefully they bring it to GABF)
T37. Russian River Blind Pig IPA (RR distributes to Colorado, but I they are very popular and still hard to find)
T48. Russian River Pliny the Younger (has an almost cult-following so if I find it somewhere, I have to grab it immediately)
Posted by ESheppy at 8/27/2012 08:28:00 AM