A couple of weekends ago I went backpacking for only the 2nd time with the whole family. You may remember our First Family Backpacking Trip last July. My youngest and I have gone a few times together, and my wife and I went quite a bit before we had kids. But, the four of us have now only gone backpacking twice.

We decided to go the same place we went last year (and the same place Connor and I have been on our trips) because big brother wanted to see some of the things little brother got to see last time. Rain prevented big bro from doing that last year.

Just like last year, I took Friday off and we headed out Thursday night to car-camp close to the wilderness so that we wouldn't waste early Friday driving to the trail-head. I don't have any pictures to share of Thursday night. It rained, and we had fun playing Mad Libs in the minivan while waiting for the storm to pass.


Anyway, we got to the trail head on Friday just fine. The skies were beautiful. We got started hiking a little before 9:45, which is much later than I wanted to get started. The late start did verify that heading out Thursday night was the right choice.
Since last year, my wife got a new backpack. Her old external-frame pack was really uncomfortable, and she struggled quite a bit last year. We were hoping a new better, more comfortable pack would help make it easier for her. Turns out that it really did. (thank goodness).

She also got a camel-back bladder. As I have mentioned (quite a bit), the kids really seemed to benefit last year from having water available without having to stop and drink from a bottle. My wife seemed to benefit from this as well. Now I am the only one in the family who carries and drinks from Nalgene Bottles while hiking. Old school.

The wife's hiking speed and comfort level improved this year. For some reason, my oldest son had issues. After awhile, we figured out adjustments on his pack that seemed to help. I also took some things out of his pack and put them in mine. Eventually, he was completely fine or at least stopped complaining.

We had lunch by the same cave we lunched by last year. It is a bit of a tradition I guess.

After lunch, it was not much farther to the area we wanted to camp. We were glad to see that our favorite campsite was open.
My wife made a little video tour of the campsite. It is a bit out-of-way, but totally worth the extra effort to get to this spot.

After setting up camp and playing in the water awhile, we decided to walk up to the spot I mentioned that big brother wanted to see.

You may remember from previous backpacking posts, that in the late 1800's there was a work-camp in this area. They were attempted to build a damn. There are some old buildings and some old equipment laying around.

On the map, this area is called "Shafthouse". Just past this shafthouse, there is an awesome overlook. Way back in Sheppy Quest 2005, I was just awestruck by this overlook and remember thinking to myself that someday I would have to show this to the kids.

I was able to show my youngest boy during Another Father and Son Backpacking Trip. Since my oldest was not with us, this is why we had to come back here this time.

And the next two pictures are of that overlook. None of my photos do this spot justice. Of course, I've seen pictures of this spot on other websites and blogs. None of those do the view justice either.

To add to the fun, this spot is a little difficult to get to. There used to be a metal ladder that helped get to this spot. This time it was gone, and we had to find our way over rocks and through cracks in some boulders. It was a bit of an adventure getting here this time.

Unfortunately, rain clouds and rumbling thunder prevented us from sticking around very long. We headed back. We got a little wet on the hike back to camp, but the real hard rain held off until we could get in the tent. We spent some time reading and napping in the tent.

Eventually, the rain stopped, and we were able to prepare and eat dinner. The boys also played in the creek some more and did some more exploration.

In fact, the boys found a little "cave" formed by a huge bolder sitting on the stream. The reason this area is called Lost Creek Wilderness is there are lots of spots where the creek disappears under huge granite boulders. Pretty awesome. Again, pictures never quite capture how cool this is. You'll have to go yourself.

The boys did a video of the cave they found:


The next day, we got up, ate breakfast, and tore down camp. The boys played a bit more in and area the rocks and river. Eventually, we got our packs on and started heading back towards the trail-head.

We hiked back out to about the same area we always camp on day 2. From here, it would be a nice easy hike out on Sunday. 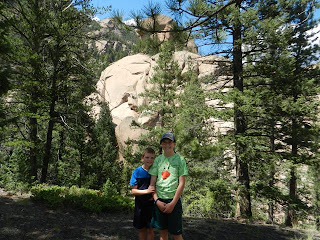 We actually made it to another awesome campsite in time for lunch. We ate.

This time, I had my kids (mostly my oldest son) set up the tent by themselves. I provided some pointers along the way, but they did a great job. Good to know I don't have to be involved with that part of setting up camp anymore.

After setting up camp, the boys and I collected lots of firewood.

Then, we explored up and down the creek.

Clouds started rolling in. As we had spent so much time and effort collecting firewood, we decided to put the wood in large black garbage bags we had brought to use as pack covers if needed.

For awhile, it appeared that the threat of rain would never materialize, but eventually, the rain did come down and we were glad that we had taken steps to keep it dry.

The campfire was great that night.

Sunday morning we got up, made and ate breakfast, and waited for the sun to clear the mountains in hopes that our rain-fly would dry up a little. Eventually, I decided to go ahead and pack it up even though it as not as dry as I would have liked.

The hike out was real easy. It took us about half an hour to get back to the minivan.

It was a great trip. I would have preferred that the storm clouds allowed us more time in the "shafthouse" area, but at least Mom and Big Brother was able to see the overlook and got to experience the fun of finding our way through cracks.

Mom's new backpack did its job. I am glad we got her that. The new tent also performed awesomely and is the easiest tent to set up that I have ever owned.

The trip has me excited. I think I am going to try to get a SheppyQuest in this year. Have not done one of those in awhile (if you don't count SheppyQuest Lite). I need to figure out where I want to do that this year.
Posted by ESheppy at 8/23/2013 06:18:00 AM