Well, according to some of the tweets I saw, #IPAday was a success.

It appears that the definition of success is how many #IPAday hash tags were tweeted in a 24 hour period. I don't really know how much that promotes the style as the people tweeting and looking at tweets were already beer geeks who for the most part already loved the style.

But, regardless of what I think ... and as I've said before many times, I don't quite get the whole twitter holiday thing, I will take the experts' word that the day was a success. The number of #IPAday tweets going out sure seemed impressive.


Of course, as you know if you follow me on twitter or read my blog yesterday or looked at the SheppyBrew facebook page at all or looked at my untappd feed, I did my part.

I earned the coveted #IPAday badge on untappd.

The first beer I had yesterday after I got home from work was not an IPA, but an India Red Ale, and it did not get me my badge. India Red from Durango Brewery  is an American Amber hopped like an IPA. This is a style I really enjoy and will usually pick over IPA's. This one was no disappointment. Loved the malt. Loved the hops. Really a nice beer. 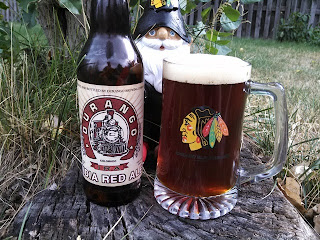 The 2nd beer of the evening was Great Divide Brewing Company Titan IPA. This is a local Denver beer. Strangely, untappd didn't have a record of me ever trying this beer before. I guess I've just always figured I might as well get the other harder to find beer than the one I could ride my bike to get to the brewery. Anyway, I really liked this beer last night. And, it got me that untappd badge. 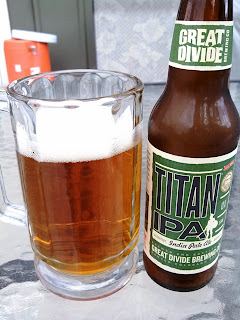 The final beer of the evening was Ommegang's Hennepin Farmhouse Saison. Shhhhhh.... don't tell the rest of the beer geeks. I might get ostracized for drinking something so different from an IPA. I think I enjoyed this one the best as I was sitting on my patio after the kids were in bed. Relaxing, looking at the stars, and listening to music, sipping a beer always puts me in a better mood. Of course I reviewed this beer a couple weeks ago if you want to remind yourself what I thought of it .... click here. 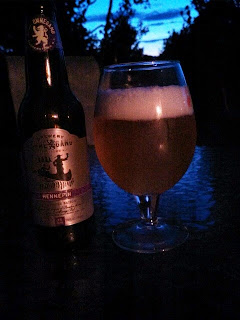 So there you go. #IPAday is over. I'll still drink IPA's. I'll still talk to people about beer. But, I won't tweet the #IPAday hash tag again (after this blog post gets auto-tweeted) until next year.