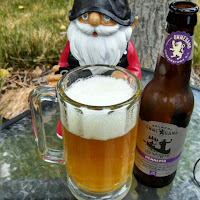 I was in the liquor store last week looking through the beer section when I found a four pack of Ommegang's Hennepin Farmhouse Saison. Knowing that it was tied for 46 on  Zymurgy's 2013 Best Beers in America list, I grabbed it. I tried the beer over the weekend.

Ommegang's Website says that Hennepin Farmhouse Saison is an "ale brewed with grains of paradise, coriander, ginger, sweet orange peel." It is 7.7% ABV and 24 IBU.

My sample was a hazy pale gold with a fluffy white head and lots of carbonation.

The aroma was lots of Belgium farmhouse funk blended with the various spices. I got significant orange (probably from the coriander and orange peel).

It tasted pretty much the same, although I think the orange was a little more lemony. It starts out sweet with spiciness in the middle and does finish off pretty dry (as a saison should).


Overall, this was a very good saison, although I think I prefer Tank 7 Farmhouse Ale. It is a nice summer ale, but can be enjoyed all year round.

If I am counting correctly, I still need to try 8 more beers on my list.

Of course, you can always check the latest on my quest to drink the beers on this list by going to this link:
http://blog.ericshepard.com/search/label/Zymurgy%20BBIA
Posted by ESheppy at 7/18/2013 05:31:00 AM