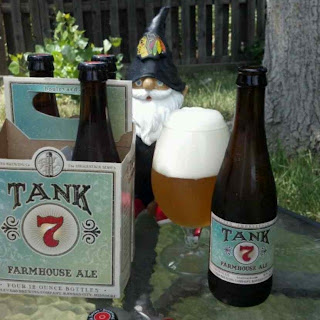 As you probably know, I've started trying to find beers that I have never had from the Zymurgy's 2013 Best Beers in America list.

At the same time I picked up Firestone Walker Wookey Jack, I also got a 4 pack of Boulevard Brewing Company's Tank 7 Farmhouse Ale, tied at number 32 on the Zymurgy list. This past weekend, I gave it a try. With all the IPAs on this list, a saison was a welcome change.

Boulevard Brewing Company is located in Kansas City, MO. Its website says it is Missouri's 2nd largest brewery. According to the Brewer's Association, it is the country's 12th largest craft brewery.

Boulevard distributes to Colorado. It seems odd that I've never had any of their beers. I'm glad the Zymurgy list got me to try Tank 7.

This beer is 8.5% ABV with a significant 38 IBU. The website says the beer is made with Pale Malt, Malted Wheat, and Corn Flakes. Its hops are Magnum, Bravo, and Amarillo.

The beer is a light straw-colored ... maybe almost orange. It is pretty light bodied with lots of carbonation and a nice dry finish. It has a wonderful "Belgium" "horse blanket" character, but nicely retrained. It is peppery and estery and fruity. I actually tasted a lot of orange which I think comes mostly from its Amarillo hops.

I think this is a great Farmhouse Ale. Perhaps the best I've ever had. I like how the yeast esters compliment the hops and all gets tied together with a yummy malt bill. Yes, I said it. This beer is yummy.

I'm going to have to try more beers from Boulevard Brewing Company.